Abrams made the remark during a media interview held in Seoul to mark his second year in office, saying that he is not concerned about any of the conventional weapons unveiled on the Oct. 10 founding anniversary of the North's ruling Workers' Party.

"There is a little doubt as to what's fully fielded and capable, and what their capability is," the commander said, according to pool reports. "In other words, we saw some new looking vehicles, but because we couldn't go up closely and inspect them, you actually don't know if those are real, or maybe they've been visually modified to look differently."

During the parade, North Korea showed off a new intercontinental ballistic missile (ICBM), along with other weapons, with leader Kim Jong-un vowing to continue strengthening the country's self-defense "war deterrent."

"People say they displayed a new tank. I don't know if that was a new tank, or an old tank that's been visually modified to look like a new tank. There's ways to do that, by the way, without having additional capabilities," Abrams said.

Abrams said, however, that in recent years the North has paraded missiles after testing them.

"They tested them, and then you know, they rolled them out in the parade, or at least that's our assessment ... We've seen these with increased range, and increased precision and solid fuel. And those, and that matches what we saw visually, during a parade," he said.

On the North's possible launch of a long-range missile at a time of leadership change in the United States, the general said there hasn't been "any sign that a test is imminent."

"What I can tell you is we don't see one that is imminent. But you're asking me what might happen next month or in January? We are going to have to wait for some more information before we can give an informed assessment," he said.

Regarding the envisioned transfer of wartime operational control (OPCON) of South Korean troops from Washington to Seoul, Abrams again stressed that it is conditions-based, saying it is "premature" to speculate on any timeline.

The Moon Jae-in administration hopes to retake OPCON from Washington within his term that ends in May 2022, but the two countries have agreed on a conditions-based transition, not time-based.

"Even to speculate two years from now, I think, would be premature, because we are doing assessments almost continuously and, like I said, we've got a ways to go," he said.

The right conditions are South Korea's capabilities to lead the allies' combined defense mechanism, its capacity for initial responses to the North's nuclear and missile threats and a stable security environment on the peninsula and in the region.

"Allies don't always agree on everything," Abrams said. "But in our case, we agree on much, much more than where we might have different views."

Abrams also flatly rejected speculation that the U.S. might be secretly planning to use the U.S.-led United Nations Command to maintain the American military's influence after Washington's transfer of the wartime OPCON to Seoul.

"United Nations Command is not a warfighting command," he said. "There is no plan, secret plan for the UNC to somehow be a warfighting or operational headquarters in the future." 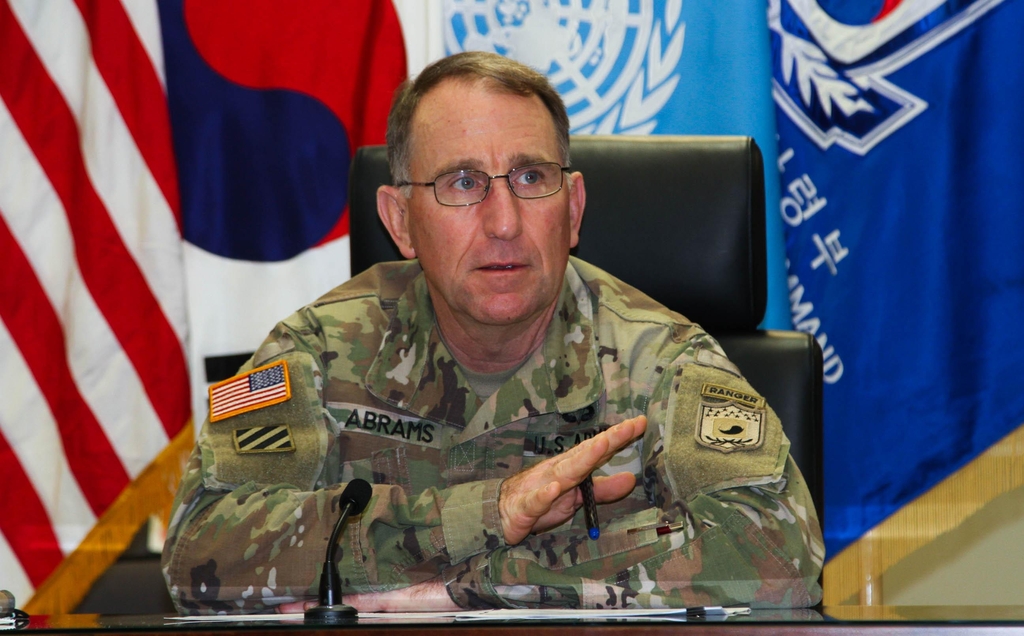 USFK commander says capability of N. Korea's new weapons yet to be verified

USFK commander says capability of N. Korea's new weapons yet to be verified