SEOUL, Nov. 23 (Yonhap) -- Jeonbuk Hyundai Motors' pursuit of their third major trophy of the 2020 football season is off to a rocky start at the continent's top club competition.

Jeonbuk, who won the K League 1 and the South Korean FA Cup titles this year, are going for a "treble," or winning three major competitions in one season. No K League club has pulled off the continental treble. 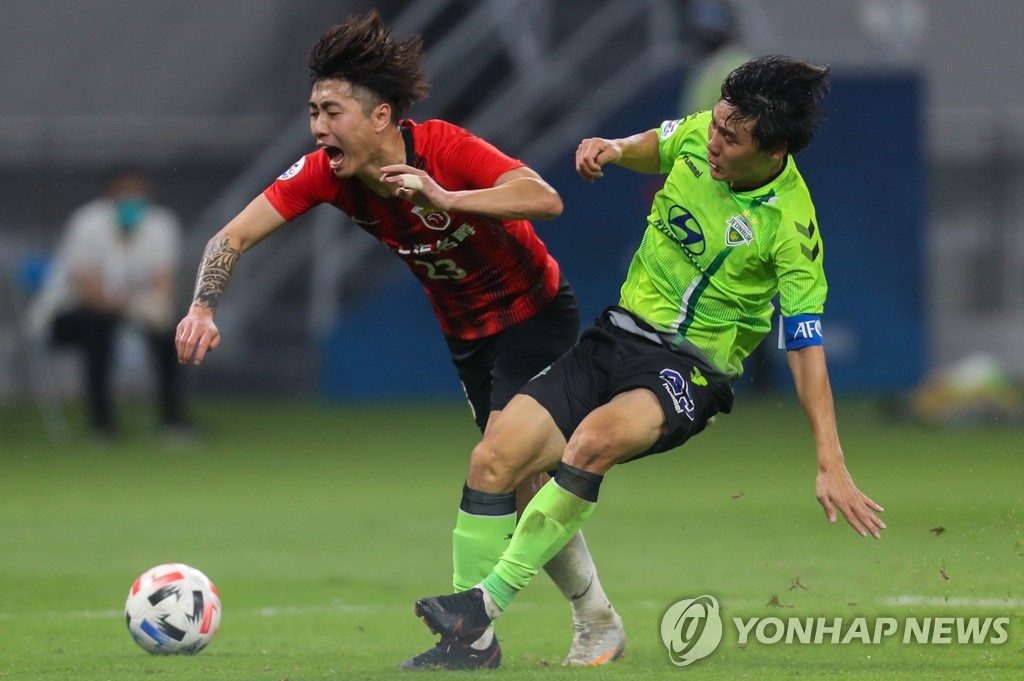 At this rate, though, Jeonbuk may have a hard time making out of the group stage. They're winless after three group matches with one draw and two losses, which leave them in third place. Yokohama F. Marinos and Shanghai each have six points to lead the way, and they've played only two matches.

The AFC Champions League group stage kicked off in February but came to a halt after one or two matches per team, because of the coronavirus pandemic. Teams in Groups E to H, hailing from South Korea, Australia, Thailand, China and Japan, resumed play over the weekend in their Qatar bubble. 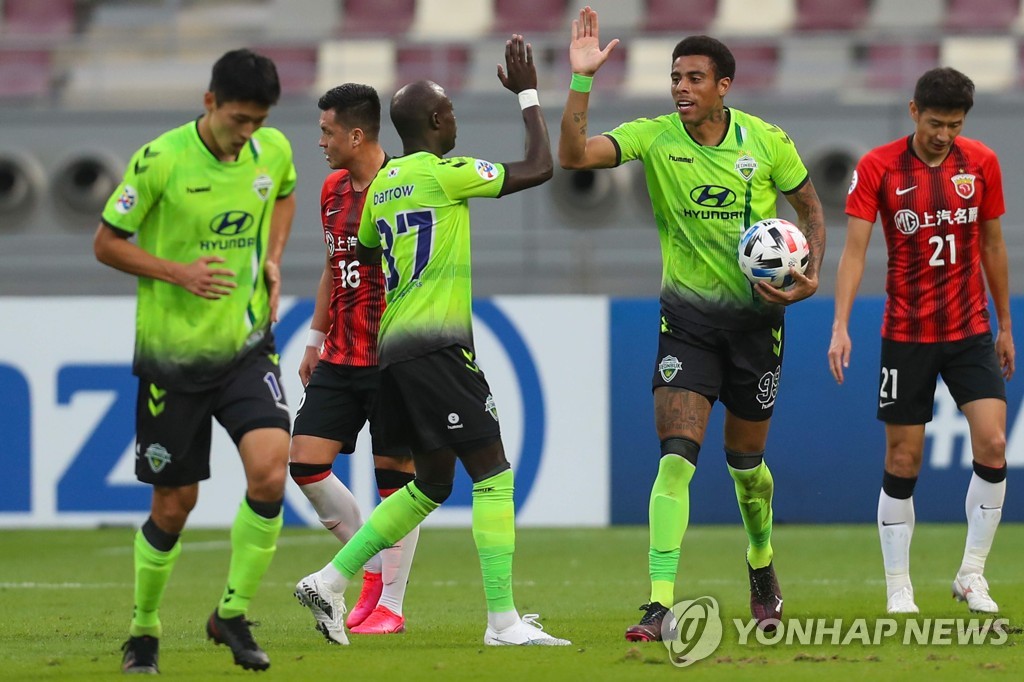 The AFC decided to put those clubs in Qatar and finish the group stage, which will be followed by the shortened knockout phase and one-and-done final on Dec. 19.

Jeonbuk played without the reigning K League 1 MVP Son Jun-ho and defender Lee Ju-yong. Both played for the national team in Austria earlier this month, and after six of their teammates tested positive for COVID-19 during the trip, Son and Lee returned to South Korea instead of Qatar and are currently serving their mandatory 14-day quarantine 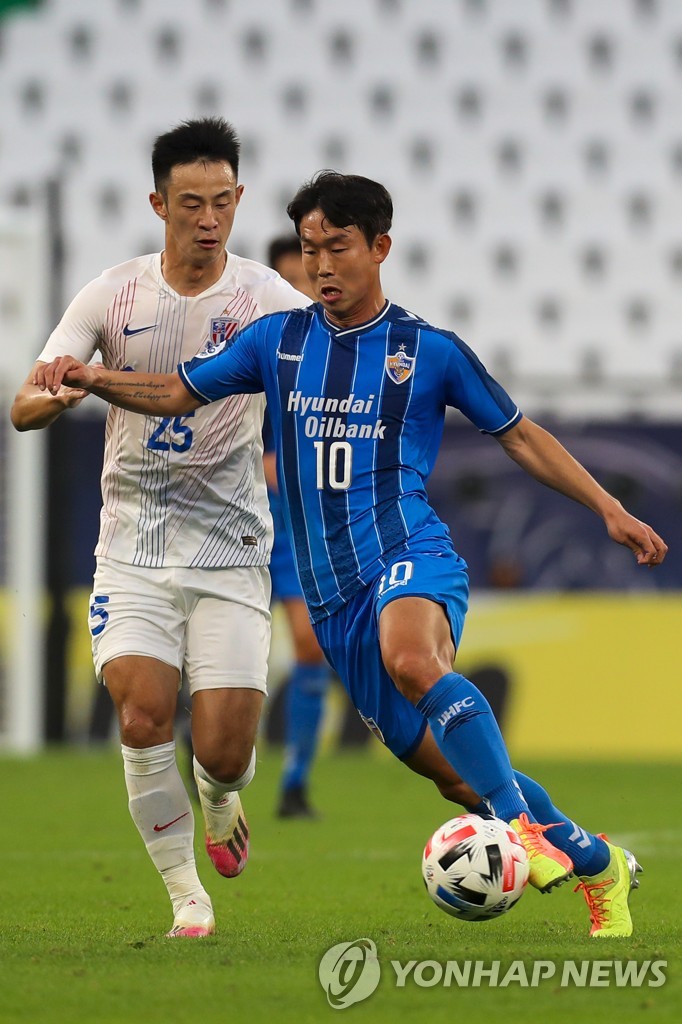 Jeonbuk coach Jose Morais acknowledged the club isn't in an ideal situation with the two key players missing, but there is still an opportunity to advance and keep the treble bid alive.

"We have a lot of players with plenty of experience, and many of our young players have so much potential," Morais said. "My job is to instill confidence in those players. We're going to concentrate hard on our remaining three matches."

As for playing without Son and Lee, Morais said, "Winning is important, but players' safety is even more so."

Jeonbuk's next match is against Sydney FC on Wednesday at Al Janoub Stadium in Al Wakrah. The kickoff of 1 p.m. local time and 7 p.m. in South Korea.

Among other K League 1 clubs, Ulsan Hyundai FC routed Shanghai Shenhua 3-1 to move to the top of Group F on Saturday, thanks to a brace by midfielder Yoon Bitgaram at Education City Stadium in Al Rayyan. Ulsan finished runners-up to Jeonbuk in both the K League 1 and the FA Cup. 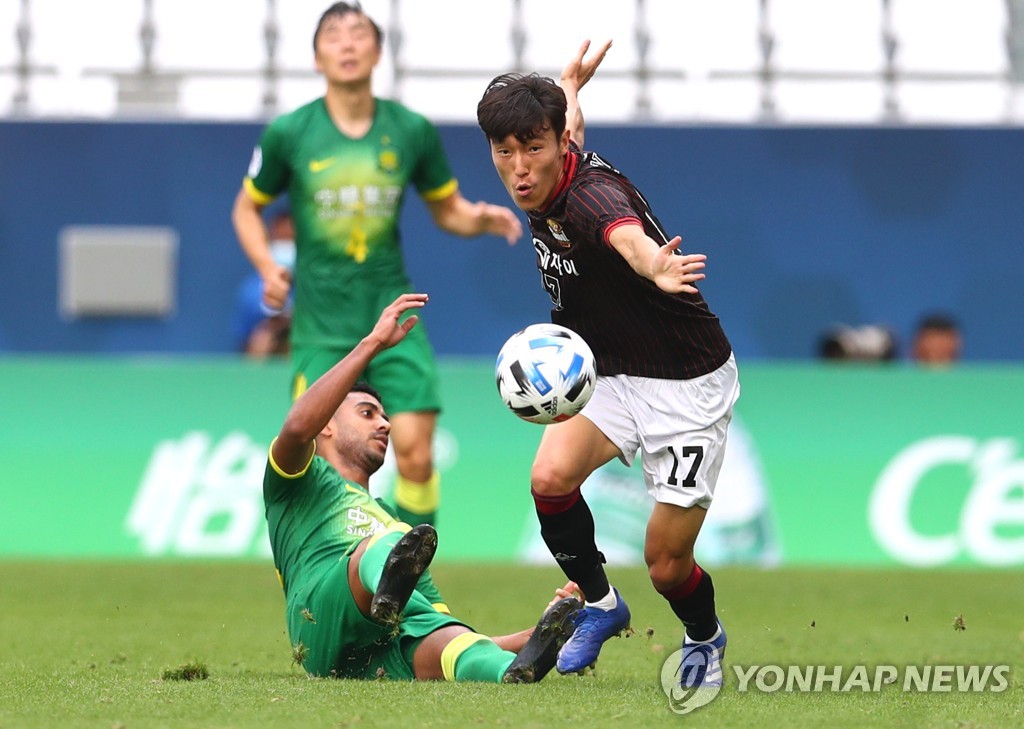 Ulsan's next match is Tuesday against Perth Glory, back at the same stadium. It kicks off at 4 p.m. local time, and 10 p.m. in Seoul.

These two teams will meet again on Dec. 1 at the same venue. Suwon would have faced the Malaysian club Johor Darul Ta'zim on Wednesday, but they have withdrawn from the competition after the Malaysian government declined to authorize their travel to Qatar.

On Saturday, FC Seoul lost to Beijing Guoan 2-1 in Group E at Education City Stadium. FC Seoul will next face Chiangrai United from Thailand on Tuesday at Jassim bin Hamad Stadium in Doha, with the kickoff set at 4 p.m. local time and 10 p.m. in South Korea.

Teams in Groups A to D have already completed their knockout matches, and Persepolis FC from Iran are waiting in the final. 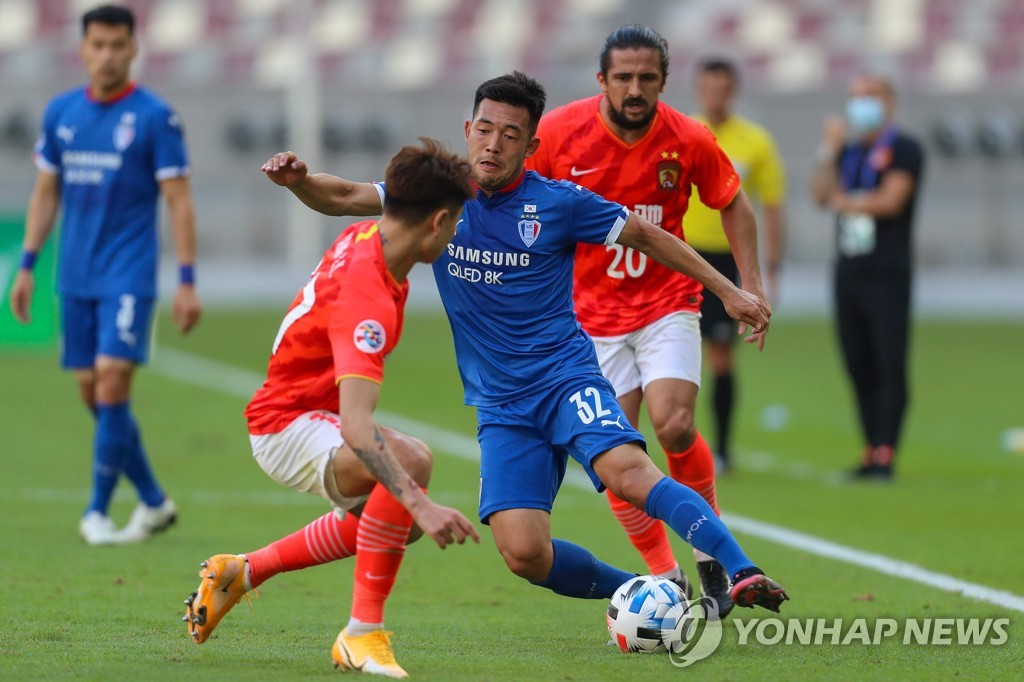