The composite consumer sentiment index (CCSI) came in at 97.9 for November, up 6.3 points from 91.6 recorded for October, according to the Bank of Korea (BOK).

The reading marks the second straight month of gain following a 12.2-point on-month rise in October.

The data comes two days before the BOK holds this year's final rate-setting meeting, with many analysts expecting the BOK to freeze its key rate at a record low. 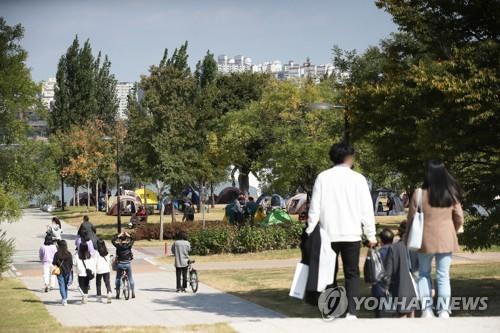 The BOK said the rebound in consumer sentiment came as people presented a brighter economic outlook amid hopes of vaccine development.

On Oct. 12, South Korea lowered the social distancing measures after applying tougher virus curbs across the nation for about two months since late August.

However, new virus cases have recently been on a upward trend as health authorities warned of a winter wave of coronavirus infections.

In August, the BOK trimmed its 2020 growth outlook to a sharper-than-expected contraction of 1.3 percent, citing the fallout of a flare-up in virus cases.