SEOUL, Nov. 23 (Yonhap) -- Many aspects of everyday life are again coming to a halt in the greater Seoul area, towards the normally busy year-end season, amid fears of a third wave of the new coronavirus.

The area's social distancing level will be upgraded to the third highest in a five-tier scheme from Tuesday to restrict gatherings of people and operations of business establishments.

A growing number of citizens are choosing to skip or cancel year-end appointments and meetings in accordance with health authorities' calls for minimizing social engagements to cope with a looming third wave of COVID-19 outbreaks.

On the opposite side of the cancelled meetings and events, owners of private business entities, including restaurants, cafes and bars, are again struggling with fears of a plunge in sales and even insolvency due to stringent operation restrictions or outright closures. 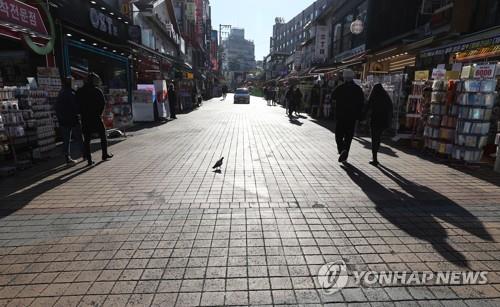 The toughened social distancing measures are also impacting the lives of about 500,000 high school seniors and graduates set to take this year's College Scholastic Ability Test (CSAT) on Dec. 3, prospective brides and grooms planning weddings in coming weeks, and entertainers and artists preparing for year-end concerts and other events.

Many corporate workers interviewed by Yonhap News Agency said they have cancelled or are cancelling one year-end appointment after another.

"I've cancelled all appointments and meetings planned for December," said a company employee in his 30s, surnamed Kim. "It was heartbreaking to make such cancellations because all the appointments were fixed after lengthy fine-tuning of busy year-end schedules of participants, mostly office workers. But it was inevitable because the threat of COVID-19 has loomed larger lately," he said.

Another salaried employee in her late 20s said she has indefinitely postponed all of her year-end meetings with company and personal friends after learning of the government's upgrade of social distancing level. "I already feel frustrated because I may be locked up at the house even at the end of the year," she said.

A 27-year-old office worker surnamed Nam said he had managed to buy a ticket for a Korean Series baseball game this week but the ticket was cancelled due to the strengthened distancing rules.

"I'm at a loss because I've already taken a day off for the baseball game. I've also booked a ticket for a year-end musical performance but I'm worried this will also be cancelled," Nam said.

With year-end gatherings and events increasingly cancelled, a sense of disappointment and even crisis is spreading among private business owners.

Under Level 2, clubs, karaoke bars and three other high-risk entertainment facilities must suspend their business, while restaurants are allowed to serve food until 9 p.m. and only takeout and delivery services are allowed for cafes.

"My fixed expenses, including rent and salaries for part-time workers, reach several tens of millions of won every month. I had expected a rebound in year-end revenues but I was wrong," sighed a 55-year-old man surnamed Kim, who runs a pub near Gangnam Station in southern Seoul.

"Reservations for December are less than half of last year's. In the past, I used to recruit more part timers towards the year's end. This year, however, I'm planning on layoffs," Kim said.

A 31-year-old merchant, surnamed Park, who runs a cafe in Seoul's Seongdong Ward, said that he is worried because takeout sales won't be enough to cover his loan interest expenses. 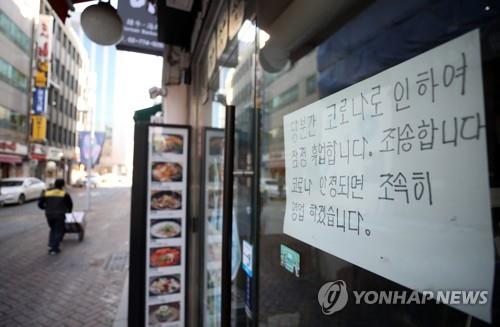 As the number of guests per wedding ceremony is limited to less than 100 under Level 2 rules, prospective brides and grooms are embarrassed.

"Until recently, I had made calls and sent out wedding invitations to my acquaintances, expecting little difficulty in conducting the ceremony. I now feel disoriented as the social distancing level has been abruptly upgraded," Kim said.

As this year's CSAT comes nearer, some school parents and high school students are calling for the postponement of one of the nation's most important academic events, though others say the best option for now is to minimize the spread of the virus.

Meanwhile, the municipal government of Seoul said it is considering downsizing its New Year bell-ringing ceremony at Bosingak Belfry in the heart of the capital on the last day of December or holding the traditional annual event online.