SEOUL, Nov. 24 (Yonhap) -- U.S. President-elect Joe Biden's pick for secretary of state is likely to pursue a more realistic approach to North Korea's denuclearization akin to the 2015 Iranian nuclear deal rather than too comprehensive a deal.

Antony Blinken once said the Joint Comprehensive Plan of Action (JCPOA) aimed at limiting Tehran's nuclear activities would be the "best deal" that President Donald Trump could reach with North Korea despite Trump rebuking it as the "worst deal ever negotiated." 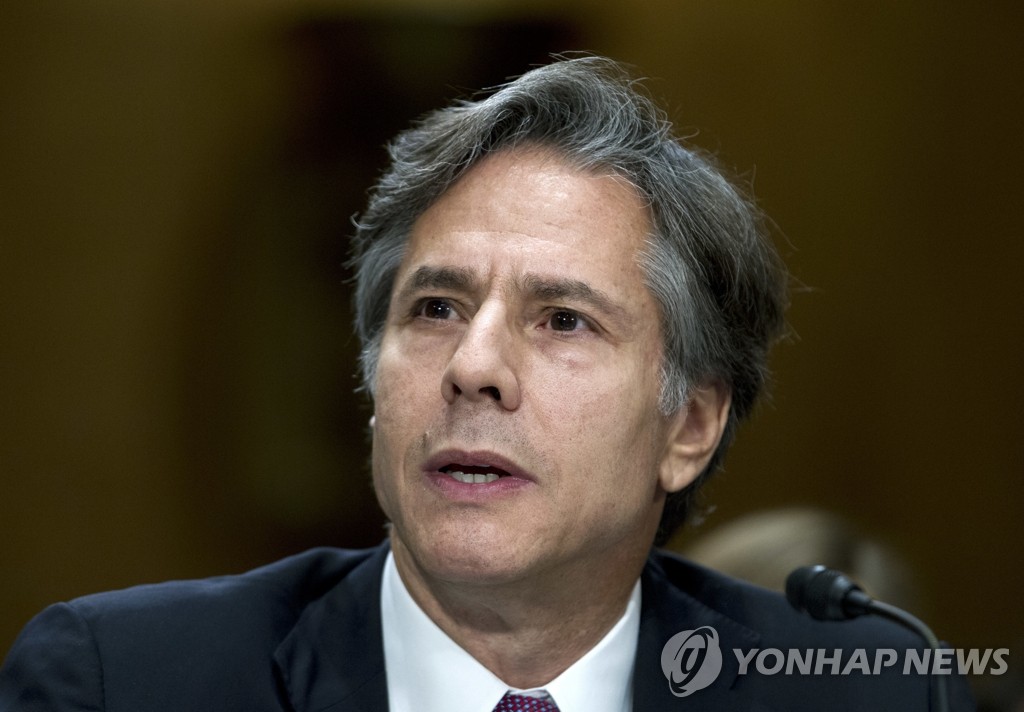 Biden's 2019 remarks for the Council on Foreign Relations that the Iran deal provides a "blueprint for an effective negotiation" with the North further reinforced the sense that his top diplomat might employ the negotiation playbook for Iran.

In 2018, the Trump administration withdrew from the Iran deal reached along with China, Russia, Britain, France and Germany, arguing it did not directly address the Islamic republic's missile development and decrying "sunset" clauses to lift restrictions on Tehran's enrichment program after 2025.

"If you look at Blinken's past opinion piece, he apparently favors a step-by-step approach to the North's denuclearization, and chances appear low that he would call for the North to first remove its nuclear program in the so-called Libyan denuclearization model," Park Won-gon, a professor of international politics at Handong Global University, said.

"But the question is whether and how North Korea would respond to that," he added.

In his op-ed piece on the New York Times on June 11, 2018, a day before the historic first-ever Singapore summit between Trump and North Korean leader Kim Jong-un, Blinken touted the Iran accord, particularly stressing the "sweeping inspections regime."

Blinken also hinted at his inclination toward an "interim" deal with the North -- in contrast to Trump's initial pursuit of a big, comprehensive deal that Pyongyang balked at.

"The administration may find merit in an interim agreement that requires North Korea to disclose all of its programs, freeze its enrichment and reprocessing infrastructure under international monitoring and destroy some warheads and missiles in return for limited economic relief," the former deputy secretary of state wrote.

Questions remain over whether the incoming Biden administration will lean toward a multilateral format to negotiate a nuclear deal with Pyongyang, as the Obama administration did for the Iran deal.

Critics have voiced concerns that a multi-party formula is likely to string out negotiations, with Pyongyang still intent on buying time to advance its nuclear program and thus strengthen its position to get the upper hand.

But Biden has said that he would push for a "sustained, coordinated campaign" with American allies as well as China to conduct negotiations with the North, while indicating he would not favor personal diplomacy with Kim but would empower his negotiators.

Blinken himself is known as a multilateralist and internationalist, fueling speculation about the possibility of a different approach to the North.

The Moon Jae-in administration has favored direct leader-to-leader engagement with Pyongyang to expedite progress in its drive for lasting peace on the peninsula, with its five-year term to end in May 2022.

Some observers pointed out that the approach to Iran should differ from the one for North Korea, given that Pyongyang has already developed nuclear warheads and an assortment of ballistic missiles and other delivery means.

"The Iran deal has been trumpeted as a foreign policy feat of the Obama administration, but I doubt whether the Biden government would duplicate the Obama-era policy, given that Iran is still far away from developing nuclear weapons," Kim Tae-hyung, a professor of international politics at Soongsil University, said.