SEOUL, Nov. 24 (Yonhap) -- A leading umbrella labor organization said Tuesday it will push ahead with its plan to stage a one-day general strike this week despite authorities' repeated warnings about its negative impact on the nation's campaign to stem the spread of the coronavirus pandemic. 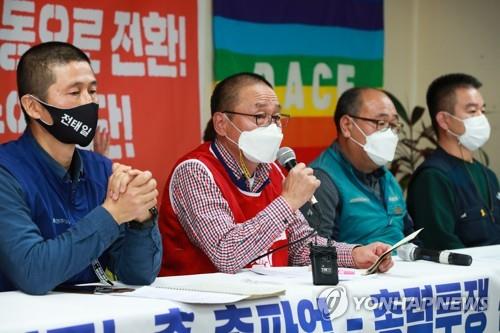 The renewed strike call came as the elevation of the government's anti-COVID-19 social distancing measures to the third highest in a five-tier scheme took effect in the greater Seoul area earlier Tuesday. The measures restrict gatherings of people.

Under the current Level 2, rallies involving 100 or more people are banned. But the Seoul metropolitan government has implemented a tougher guideline prohibiting rallies of 10 or more people, which is equivalent to Level 3 guidelines.

On Tuesday, the country added 349 more COVID-19 cases, including 320 local infections, raising the total caseload to 31,353, according to the official data.

The government has been pushing for a revision of labor laws to allow laid-off and unemployed workers to join labor unions before ratifying key International Labor Organization (ILO) conventions.

The ILO conventions are aimed at improving workers' rights, but the KCTU are protesting certain revisions deemed favorable to management, including one that prohibits striking workers from occupying key facilities at workplaces.

The KCTU is also demanding the enactment of three more labor reform bills to give trade union rights to small workplaces with fewer than five employees and workers in special employment types and hold companies and their managers accountable for grave industrial disasters.

The umbrella group said it will sporadically hold rallies of less than 10 people in front of the ruling Democratic Party's chapter offices throughout Seoul in compliance with the metropolitan government's guidelines, though the size of rallies can grow bigger in other areas depending on respective distancing rules.

KCTU officials expect Wednesday's walkout to be joined by 150,000 to 200,000 union members, including those from Hyundai Heavy Industries and GM Korea.

At the union of Hyundai Motor Co., a key member of the KCTU, only a small number of union representatives are said to be taking part in the walkout, triggering speculation that the actual number of strike participants will be far smaller than expected.

The KCTU's planned group action will be its first general strike this year. The group, the more militant of the nation's two largest umbrella labor organizations, staged two such strikes last year, in March and July. The July walkout drew only 12,000 participants, or 1 percent of its entire membership.

Earlier in the day, Prime Minister Chung Sye-kyun said in a Facebook post that the KCTU should consider canceling its walkout plan. He also warned of stern measures against possible violations of the social distancing scheme during the walkout.

"Workers' rights should be respected, but the people's lives and safety are the top priority for now," Chung said, declaring a principle of zero tolerance against rallies that threaten the public safety and disrupt the government's antivirus efforts.