SEOUL, Nov. 24 (Yonhap) -- For the first time in franchise history, the NC Dinos are the champions of South Korean baseball.

The Dinos captured the 2020 Korean Series title over the Doosan Bears on Tuesday, thanks to a 4-2 victory in Game 6 of the best-of-seven championship round at Gocheok Sky Dome in Seoul.

Lee Myung-ki broke the scoreless tie for the Dinos with a two-out single in the fifth, and the Dinos put up three more runs in the sixth to back starter Drew Rucinski, who tossed five scoreless innings in a gritty outing on two days' rest for his second win of the series. 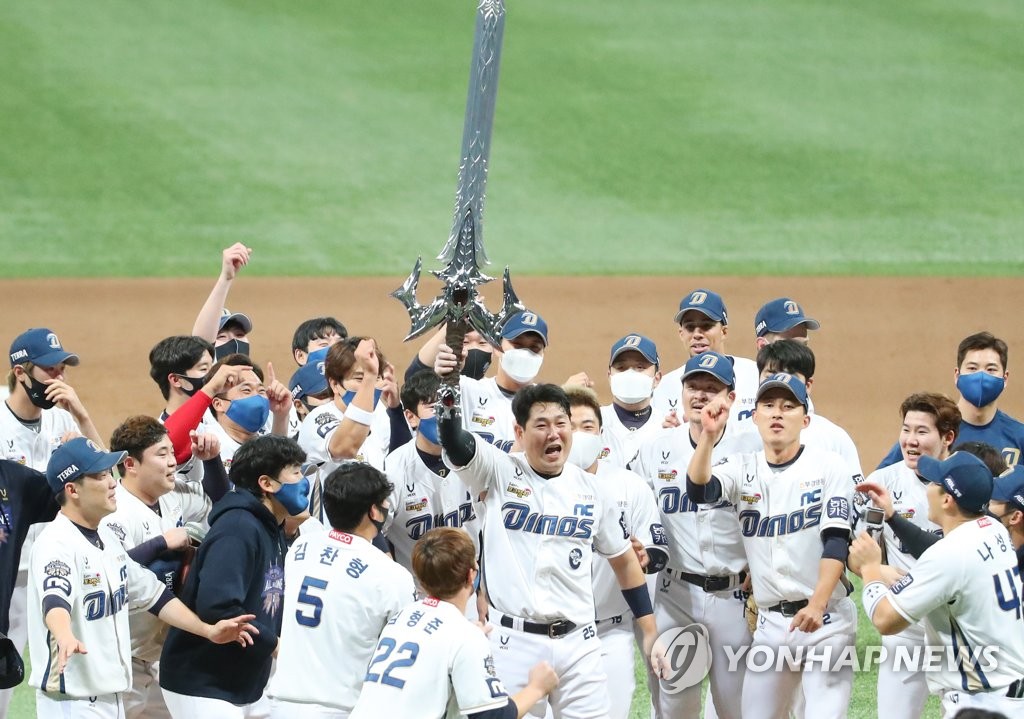 NC captain Yang Eui-ji was voted the Korean Series MVP after batting .318 with a home run, three RBIs and three runs scored. Yang received 36 out of 80 votes from the media, beating out Rucinski by three votes. Rucinski won two games and saved another in the series. 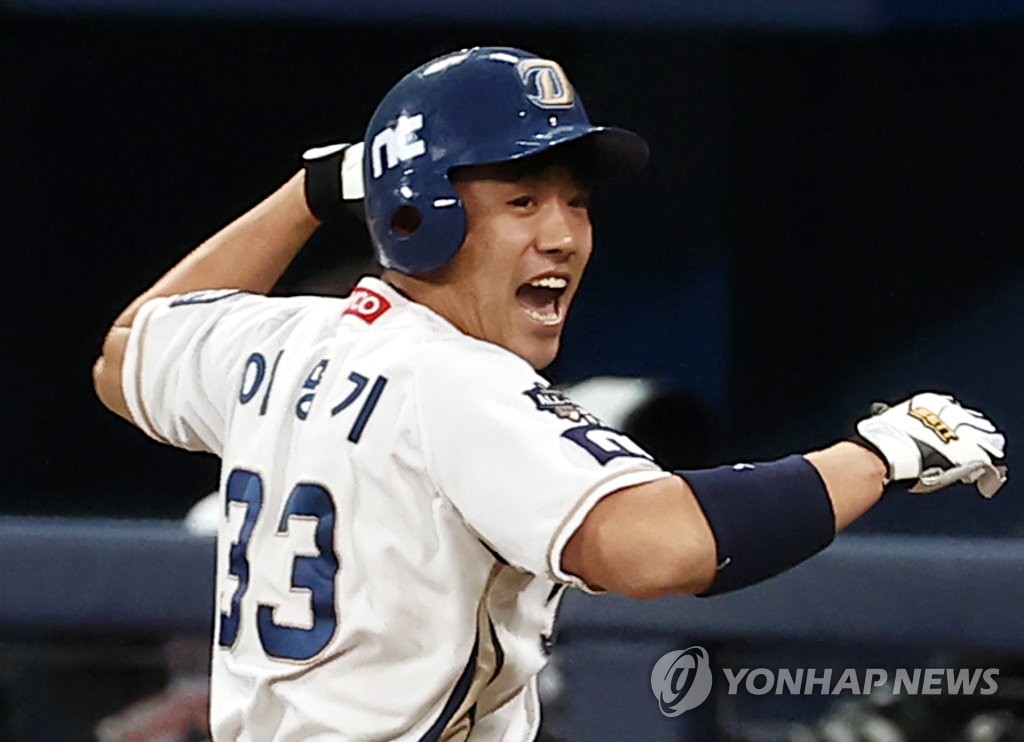 The Bears were trying to win their second straight championship and their fourth in six years. After a 7-6 win in Game 3, their bats froze up and never got going again. They were shut out 3-0 in Game 4 and then 5-0 in Game 5, and eked out just two runs on Tuesday.

"I was just numb when we got the final out," NC manager Lee Dong-wook said. "This is a dream come true. Before the season, our goal was just to reach the postseason. But the players really took the initiative and made this championship possible."

With Rucinski struggling with his command early, the Bears put two runners on in the first but couldn't cash in. 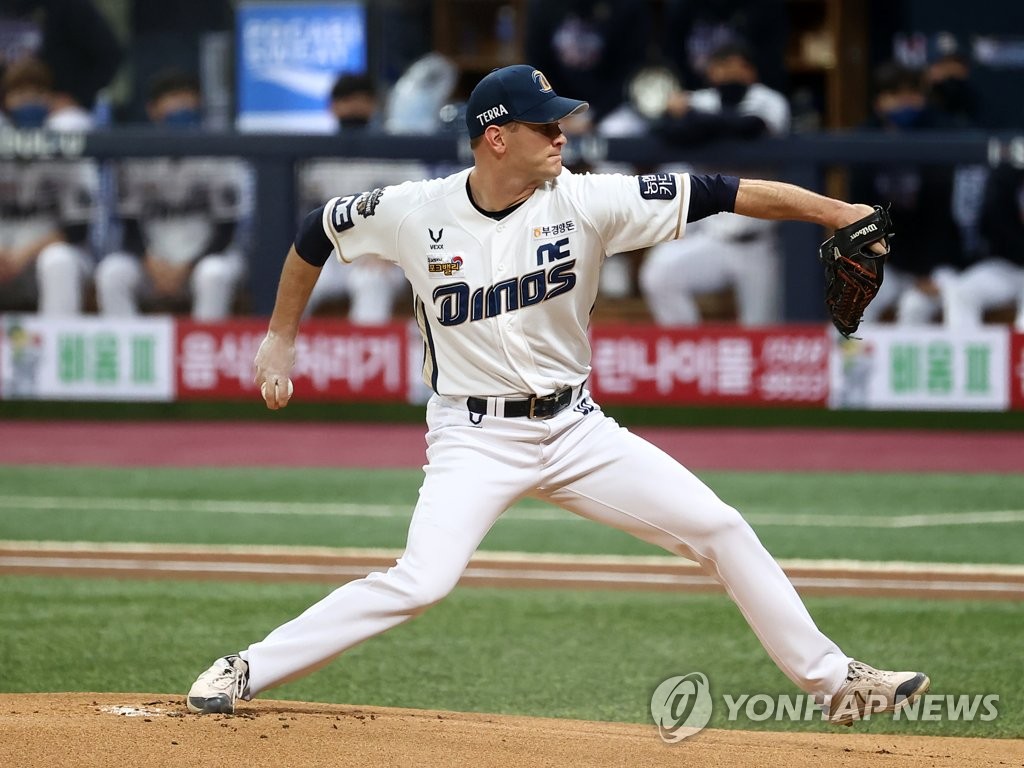 They then wasted a one-out, bases-loaded opportunity in the second.

After a three-up, three-down third, the Bears' drought reached a Korean Series-record 23 innings in most excruciating fashion in the fourth inning.

The Bears started the fourth inning with a single and a double, but those hits were followed by three straight groundouts -- the first two of which weren't deep enough for the slow-footed Jose Miguel Fernandez to score from third. 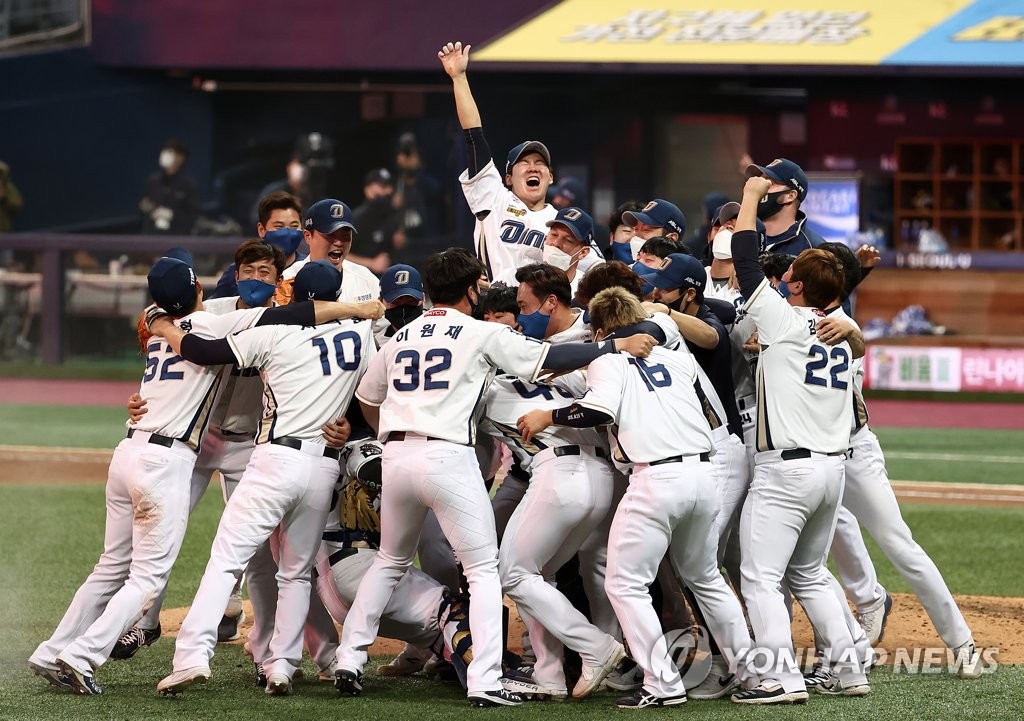 Jung Soo-bin led off the Bears' fifth inning with a single and stole second to get himself into scoring position. But the next three batters went down in order.

Doosan starter Raul Alcantara did everything in his power to keep the Bears in the game, but he finally cracked in the bottom fifth against the relentless Dinos' lineup. 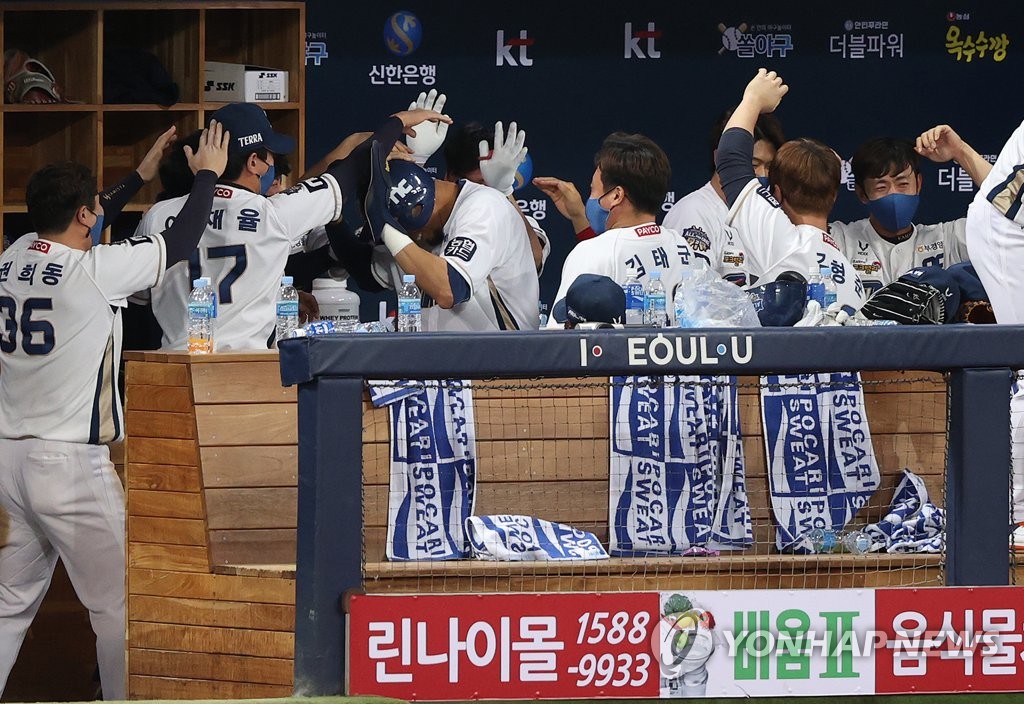 With two outs, they pieced together three straight singles to open the scoring, the third being a seeing-eye hit by Lee Myung-ki that got through the hole on the right side.

With Alcantara still on the mound, the Dinos doubled their lead in the bottom sixth. After Aaron Altherr's double off the top of the right field wall, Park Sok-min dumped a single to shallow left for a 2-0 lead. The hit knocked Alcantara out of the game.

Reliever Park Chi-guk came on and then walked two batters to load the bases for Park Min-woo, who delivered a two-run single against new pitcher Lee Seung-jin. 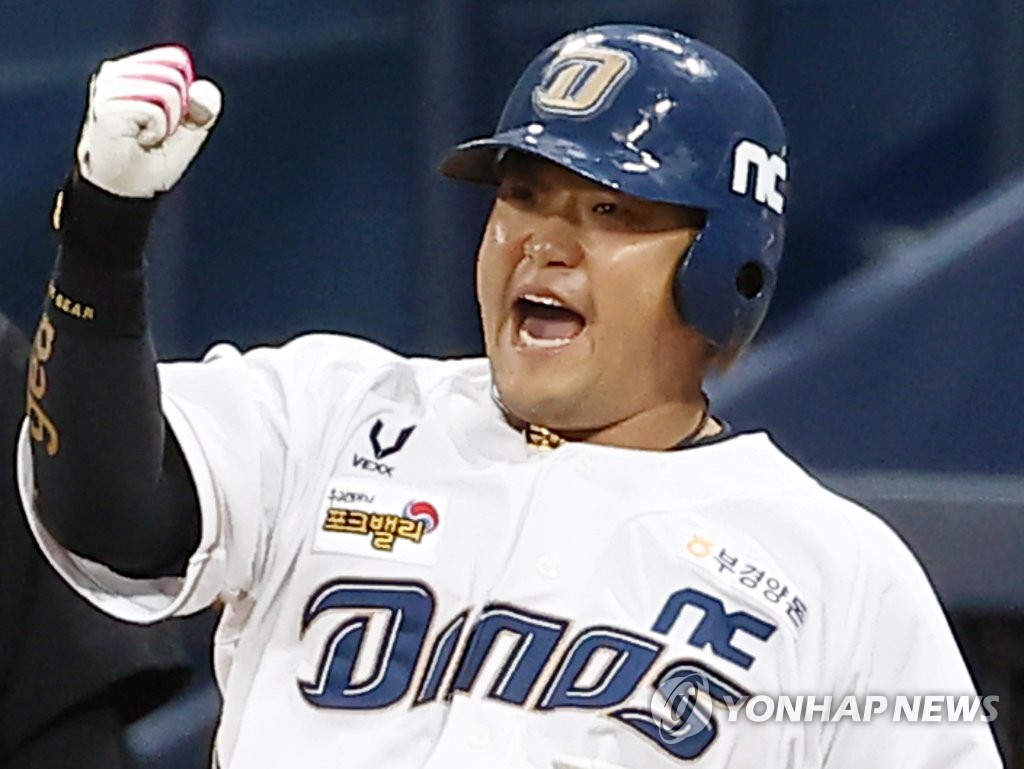 The Bears slashed the deficit in half in the top seventh, while also snapping their scoreless streak at 25 innings, a postseason record.

Their first two batters both got hit by pitches, and then cleanup Kim Jae-hwan brought in the first run with a groundout.

Kim Jae-ho followed up with an RBI double that made it a 4-2 game.

But that was the extent of the Bears' offense. Song Myung-gi, the winning pitcher from Game 4, tossed a perfect eighth, and closer Won Jong-hyan locked down the save with a flawless ninth.

"I didn't want this to go seven games," NC manager Lee said, "We brought Song and (starter) Mike Wright (in the sixth) to try to finish it tonight. And it worked out perfectly."

The Dinos were founded in 2012 and joined the Korea Baseball Organization (KBO) in 2013. 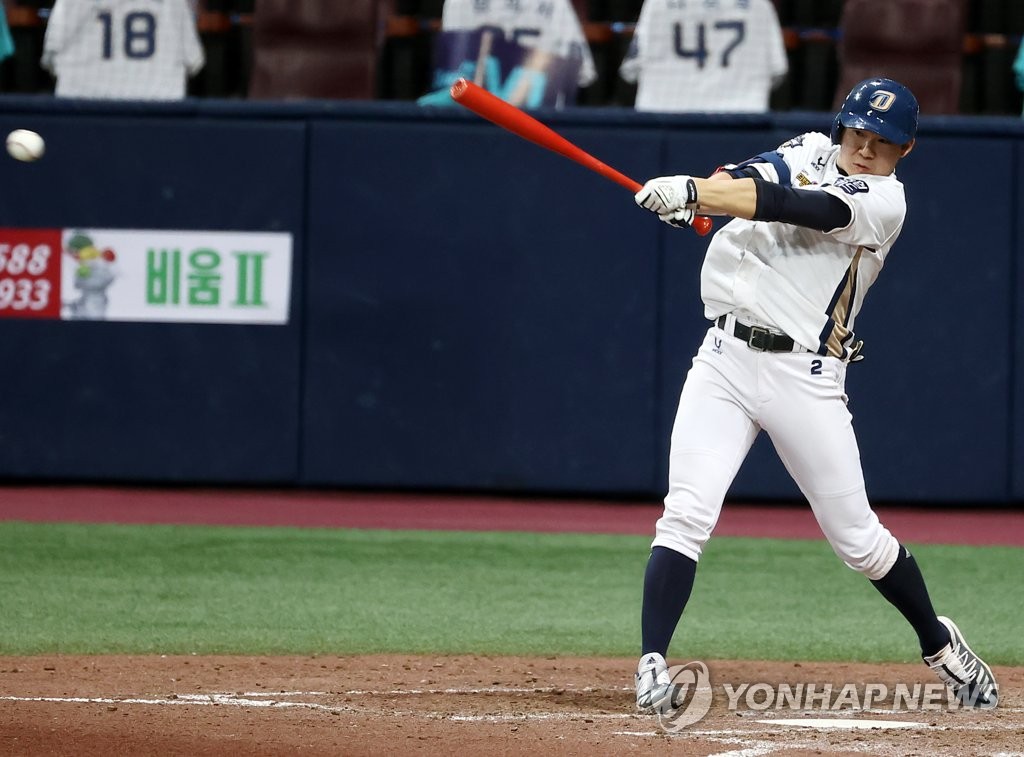