SEOUL, Nov. 24 (Yonhap) -- The NC Dinos climbed to first place on May 13, the ninth day of the regular season in the Korea Baseball Organization (KBO), and they never came down again as they claimed their first-ever pennant.

And the Dinos were crowned the Korean Series champions on Tuesday, as their dominant year culminated in the franchise's first KBO title. With a 4-2 win on Tuesday, they knocked off the defending champions Doosan Bears in six games.

During the regular season, the bats kept the Dinos in front, while their pitching overcame some early season bullpen woes and showcased promising young arms. 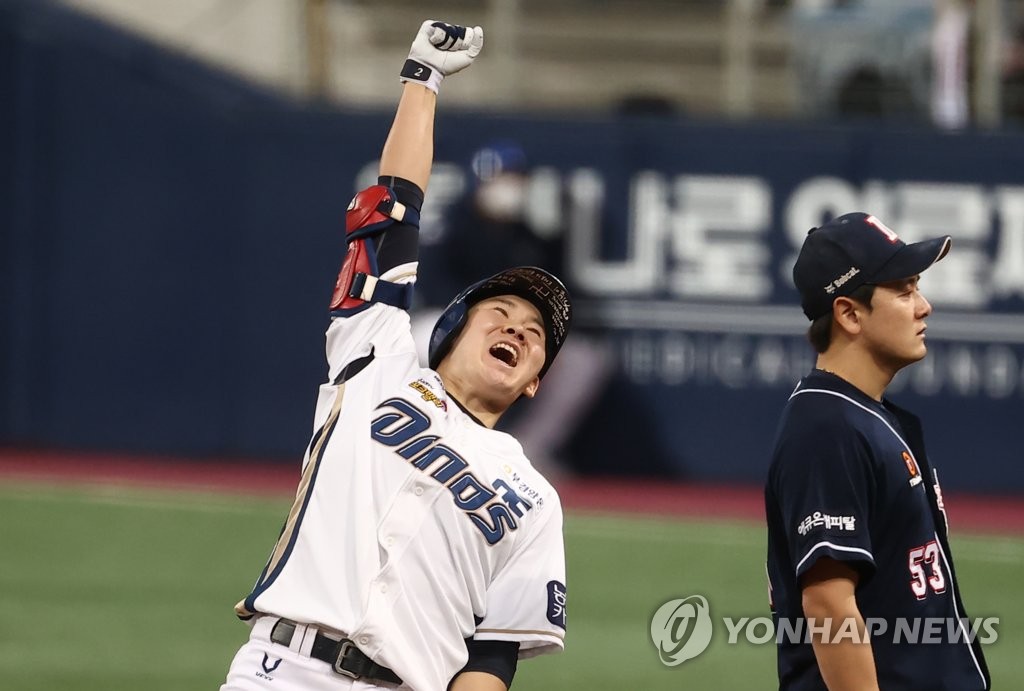 Yang set a single season record for most RBIs by a catcher, while Na bounced back nicely after missing most of the 2019 season with a knee injury. Altherr, their first-year foreign hitter, was the league's most dangerous No. 8 hitter. From the eighth spot in the lineup, Altherr had 17 homers and 52 RBIs.

And those three mashers did damage in the Korean Series. Altherr smacked a three-run home run to key a 5-3 victory in Game 1, while Na went 4-for-4 in that game. After getting held hitless in Game 2, Na broke out for two more hits, including a home run, and four RBIs in Game 3. He had a three-hit effort in Game 5, and picked up another hit in Game 6.

Yang inflicted serious damage on his former Bears teammates in multiple ways. At the plate, Yang had three hits, with two doubles, in Game 2, and knocked in a winning run in Game 4. In Game 5, Yang delivered a two-run homer in a 5-0 win. 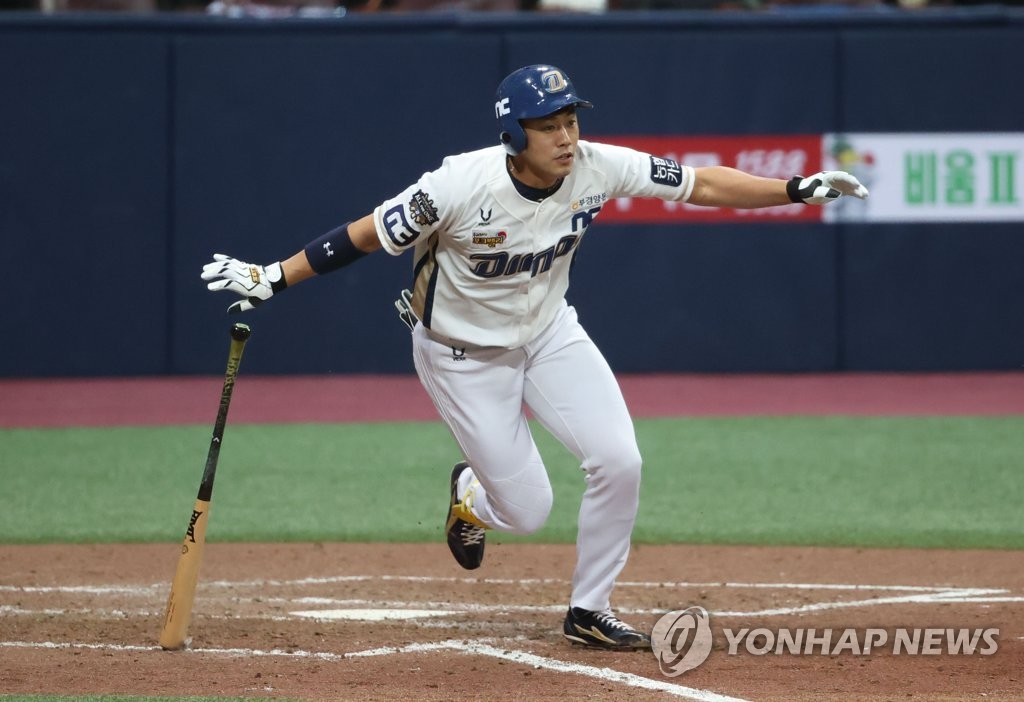 And with Yang calling the shots for pitchers, the Dinos blanked the Bears in Games 4 and 5, winning by a combined 8-0.

On the mound, left-hander Koo Chang-mo was spectacular early in the regular season, with a 9-0 record and a 1.55 ERA before the Dinos deactivated him at the end of July for a breather. They first discovered left forearm inflammation, and during his rehab, the club also discovered a small fracture in the same arm. Koo ended up missing three months.

He returned in late October to make two appearances before the postseason. His second start of the Korean Series was particularly memorable, as the 23-year-old lefty fired seven shutout innings in Game 5 for a 3-0 victory.

In Koo's absence, second-year starter Drew Rucinski held down the fort and went 19-5 with a 3.05 ERA. The American right-hander was the winning pitcher in Game 1 and recorded a save in Game 4 on three days' rest. Then after only two days of break, Rucinski tossed five shutout innings in the clinching Game 6 Tuesday. 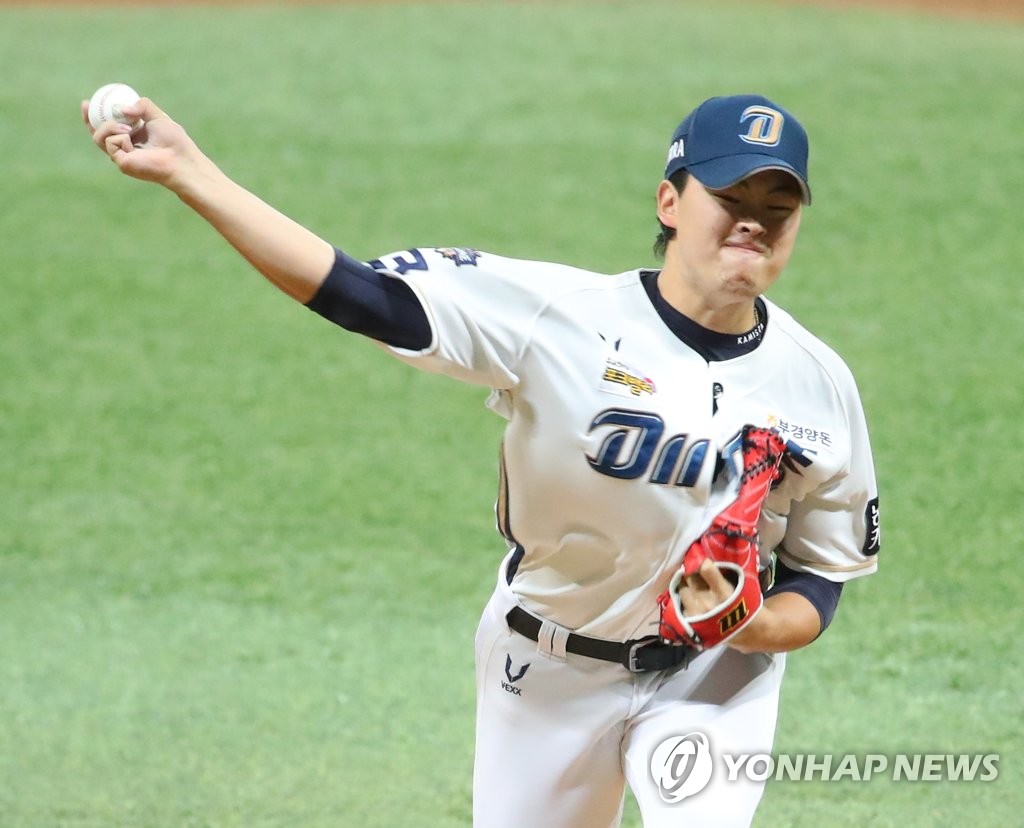 A 20-year-old homegrown starter Song Myung-gi was excellent down the stretch in the regular season, winning all five October starts and posting a 2.77 ERA. Song then picked up where he left off in the Korean Series, blanking the Bears for five innings of two-hit ball in a 3-0 victory in Game 4 last Saturday.

Song then came out of the bullpen to pitch a perfect eighth inning in Game 6.

NC manager Lee Dong-wook has embraced the front office's data-driven approach, and said keeping an open line of communication with the club's data analysts has been a key to success.

"No matter how great numbers are, they are useless unless we make the most of them on the field," said Lee, who shifted aggressively against some left-handed Doosan hitters all series. "(Our coaching staff) have more meetings with our data analysts than before, and we trust them to come up with information that will help the club."

Lee said players are now more receptive to advanced data than in the past, too.

"Players today won't accept your coaching if it's not accompanied by scientific data," the manager added. "I wasn't a good player, and I became a coach fairly early. I've wanted to make sure my players won't deal with the same problems that I did." 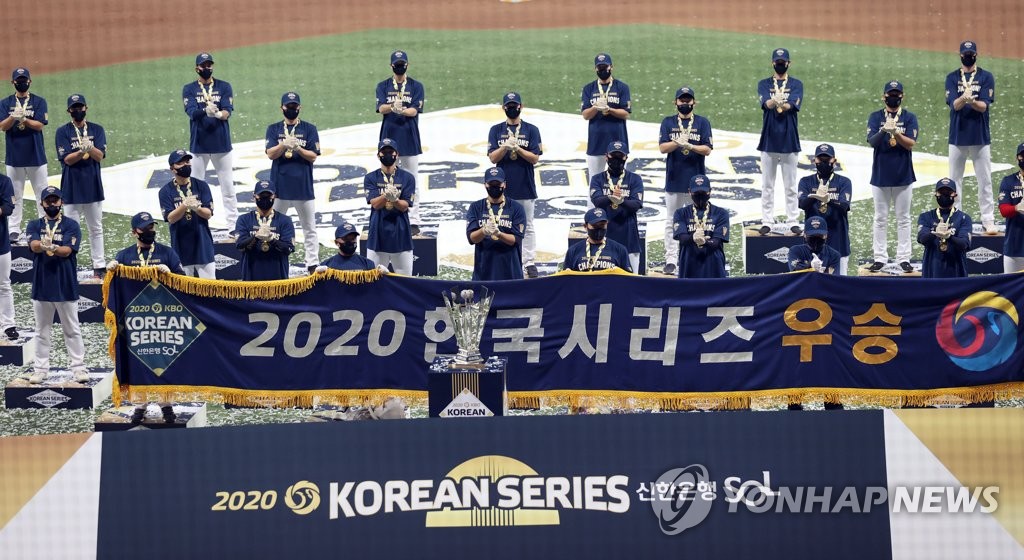 Koo and Song are part of the young core that represents the Dinos' future. Their position player group isn't quite as spry, though they have a pair of 27-year-olds who've been with the Dinos since Day 1, first baseman Kang Jin-sung and second baseman Park Min-woo. The lineup could be broken up with Na expected to jump to the majors this offseason.

Yang, though he hasn't shown any signs of slowing down, will be 34 next year playing the toughest position in baseball. Shortstop No Jin-hyuk, coming off his best offensive season with 20 homers and 82 RBIs, will be 32. The 35-year-old third baseman Park Sok-min enjoyed a productive season with a .306 batting average and the league-best .436 on-base percentage, but he has also shown his age with his glove during the postseason.

The competitive window may not be as wide open as the Dinos would like, but they crashed through that this year with force. 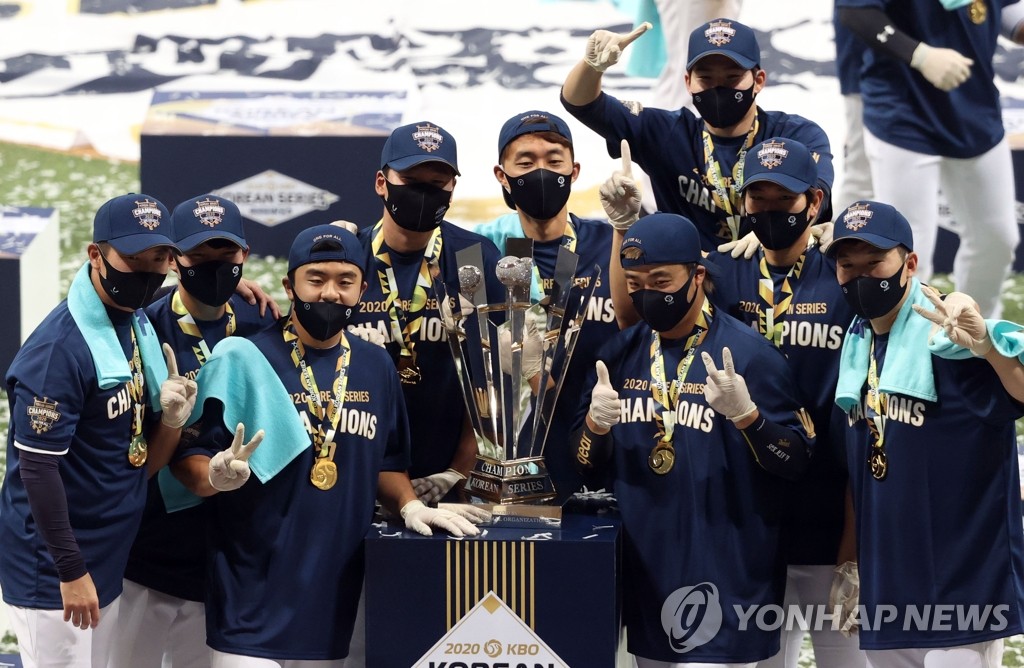