The combined market value of those 102 listed firms came to 1,069.5 trillion won (US$960 billion) as of Monday, up 22.3 percent from the end of last year, according to the data from financial information provider FnGuide.

Four groups -- Samsung, SK, LG and Hyundai Motor -- had a market value of more than 100 trillion won. The number was up two from end-December.

Samsung, whose flagship is Samsung Electronics Co., had the largest market value of 588.7 trillion won, accounting for more than half of the total stock market capitalization.

SK, which has chip giant SK hynix Inc. under its wing, came next with 151.9 trillion won, followed by LG with 122 trillion won and Hyundai Motor with 107.5 billion won.

The top 10 groups, meanwhile, took up 50.2 percent of the combined value of the country's main and secondary stock markets tallied at 2,130 trillion won, according to the data. 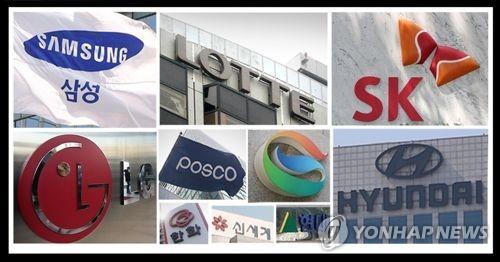