The nation's net terms-of-trade index for goods -- a gauge of trade terms -- came in at 97.76 in October, up 7.6 percent from a year earlier, according to preliminary data from the Bank of Korea (BOK).

It marked the seventh straight month of an on-year rise since April, when the trade terms posted the first on-year gain in over two years on low oil prices amid the fallout of the COVID-19 pandemic.

The figure is calculated by dividing the index for export prices by that for import prices, showing the amount of imports a country can buy for each unit of exports. The base year is 2015, with a benchmark index of 100.

Last month, export prices declined 3.5 percent from the previous year on a customs-clearance basis, and import prices fell by a wider margin of 6.7 percent, causing the trade terms to improve, the BOK said.

South Korea's exports, which account for about 50 percent of the economy, fell 3.8 percent on-year in October, after marking the first monthly gain in seven months in September. 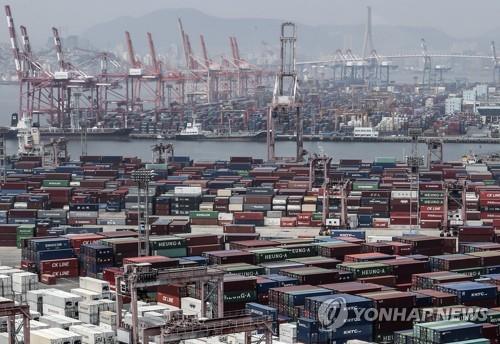