SEOUL, Nov. 26 (Yonhap) -- The prosecution chief sought an injunction Wednesday against the justice minister's move to suspend and discipline him over allegations of interference in sensitive investigations, his lawyer said.

Yoon will also lodge a formal lawsuit on Thursday to nullify the measure, he added.

The two have been at loggerheads over prosecution reforms and a raft of controversial cases, including those involving politicians and Yoon's relatives.

Two groups of prosecutors, in Seoul and Busan, issued statements Wednesday in protest of what they called Choo's "illegal and unjust" measure.

"Justice Minister Choo's action seriously undermines the rule of law and violates the independence of the prosecution," a group of prosecutors in charge of research and planning at the Supreme Prosecutors Office in Seoul said in a statement. posted on the online bulletin board of the prosecution.

They requested the minister withdraw the decision so that prosecutors could fulfill their duties "in accordance with the Constitution and conscience."

Rank and file prosecutors of the eastern branch of the Busan District Prosecutors Office also held a meeting and registered a similar statement.

"It is illegal and unjust to seek a disciplinary action against the prosecutor general and suspend him from his duty at a time when the facts have not been fully confirmed," they said. 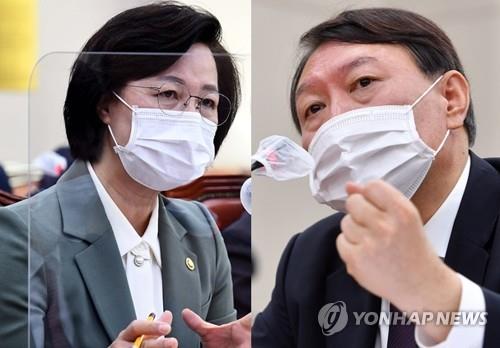 As reasons to seek disciplinary actions, the minister cited Tuesday what she called Yoon's "improper" meeting with a media company owner, the illegal inspection of judges involved in controversial cases, interference with the prosecution's investigations to protect people close to him and damage to public trust in the political neutrality of the prosecution. She also cited his alleged leak of information to the press on the Supreme Prosecutors Office's launch of an audit into his close aide involved in an alleged blackmail case.

Right after the announcement of his suspension, Yoon said Tuesday he would "take legal action."

"Reflecting on my past deeds, I have done nothing to be ashamed of as prosecutor general and have worked hard to protect the political neutrality of the prosecution," Yoon said.

The ministry is expected to convene a disciplinary committee to deal with the case as early as next week, sources said.

A revised law passed the National Assembly in September to prevent potential power abuse by the justice minister when it comes to disciplinary actions against prosecutors. But the law will go into effect on Jan. 21 and will not be applied to this case retroactively.

According to a ministry official, there is no need to form a new committee, as the outside experts have not completed their terms.

Under the relevant law, the committee is allowed to call in Yoon for in-person questioning. The justice minister, who is the one who sought disciplinary action against Yoon in the first place, is barred from participating in the deliberation process.

The committee will decide among five levels of punishment, with dismissal the heaviest and reprimand the lightest. If the committee goes with salary reduction -- the second lightest punishment -- or heavier, it will be the president who will execute the disciplinary action against Yoon. 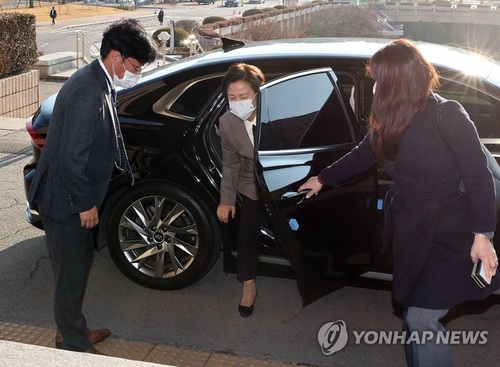 "Prosecutor General Yoon is preparing an injunction against Choo's decision to suspend his duties. He is considering various measures, including legal ones, at home," he was quoted as saying during a meeting with lawmakers from the main opposition People Power Party who visited his office.

Also on Wednesday, inspectors raided the information gathering office of the Supreme Prosecutors Office to probe allegations that Yoon ordered illegal inspections of judges in charge of the cases involving former Justice Minister Cho Kuk, who clashed with Yoon over prosecution reforms and was charged over his daughter's academic credentials and his family's dubious investments.

Minister Choo did not answer a bombardment of questions from reporters on her way to the office in the morning.