SEOUL, Nov. 25 (Yonhap) -- A Seoul appellate court on Wednesday overturned a lower court's prison sentence for the chief of South Korean textile and chemical conglomerate Hyosung Group, indicted for embezzlement and breach of trust, and granted a suspended prison sentence after acquitting him of certain charges.

The Seoul High Court sentenced Hyosung Group Chairman Cho Hyun-joon to imprisonment of two years, suspended for three years, after convicting him only on the charge of embezzling 1.6 billion won (US$1.44 million) from company coffers. 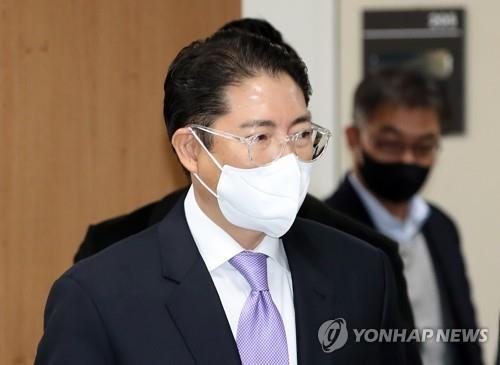 In September last year, the Seoul Central District Court sentenced Cho to two years in prison after finding him guilty of embezzlement related to the payment of 1.6 billion won in salary to fake employees and breach of trust related to the sale of his personal artworks to a Hyosung company at allegedly inflated prices. At that time, the district court didn't order his immediate detention.

Cho was indicted in January 2018 for allegedly incurring 17.9 billion won in losses for a Hyosung subsidiary by inflating its corporate valuation and gaining illicit profits of 1.2 billion won between 2008 and 2009 via the sale of 38 art pieces to a Hyosung affiliate at higher prices than their appraised values in addition to the embezzlement charges.

Both courts acquitted Cho of the breach of trust charge linked to the 17.9 billion won loss and the appellate court additionally acquitted him of the artworks-related charge, citing the lack of objective data to assess their values.

"The amount of embezzlement is not small but the defendant has already restored the damage fully," the Seoul High Court said.

The 51-year-old Cho, a grandson of the late Hyosung founder Cho Hong-je, took over the group chairmanship from his father Cho Suck-rai in 2017. Hyosung, the nation's 22nd-largest conglomerate in terms of assets, has 57 affiliates, with its businesses stretching from textiles, chemicals and trading to heavy industries and construction.