SEOUL, Nov. 26 (Yonhap) -- Foreign Minister Kang Kyung-wha and her Chinese counterpart, Wang Yi, are set to hold talks in Seoul Thursday, amid expectations that Beijing's top diplomat would seek to cement ties between the two countries ahead of a leadership change in the United States.

Kang and Wang are scheduled to meet at 10 a.m. to discuss bilateral high-level exchanges, the situations on the Korean Peninsula and in the region, pending global issues and other matters of mutual concern, the foreign ministry said.

Their agenda is expected to include the countries' efforts to arrange a visit to South Korea by Chinese President Xi Jinping and Seoul's push to host a trilateral summit among the leaders of South Korea, China and Japan before the end of this year.

After a luncheon with Kang, Wang is scheduled to pay a courtesy call on President Moon Jae-in at the presidential office, Cheong Wa Dae. 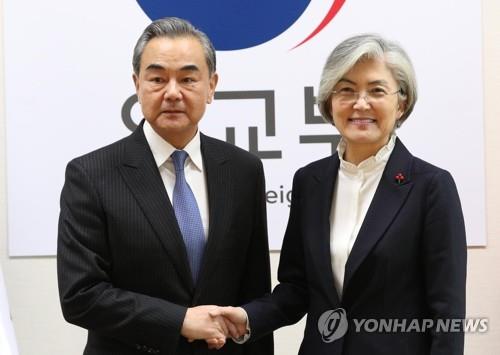