SEOUL, Nov. 28 (Yonhap) -- East coast cities and towns are nervously waiting for the onset of the year-end and new year holiday season, fearing a massive influx of tourists at their sunrise hotspots will further heighten chances of the spread of the coronavirus.

Many local governments along Gangwon Province's eastern coast have already canceled their annual sunrise festivals in accordance with health authorities' toughened social distancing guidelines, while some others will scale down events or remain undecided due to their reluctance to give up huge tourism revenues.

According to Gangwon officials on Saturday, two east coast cities -- Sokcho and Donghae -- and Goseong County, which are home to many popular sunrise locations, have already canceled their annual sunrise events to help stem the spread of COVID-19. 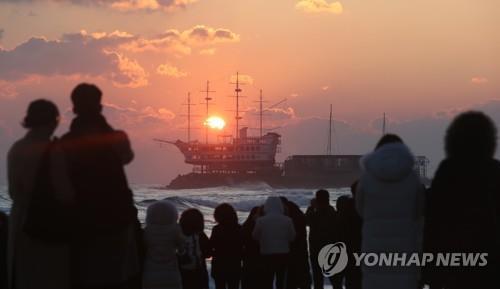 In the previous years, they used to welcome visitors wanting to greet the new year at romantic hotspots with concerts, traditional performances, folk games, fireworks shows and other colorful events.

"We once mulled over a 2021 sunrise festival to wish for the prosperity of both citizens and tourists. But in consideration of the ongoing fight against the coronavirus, we've finally canceled all official sunrise events," a municipal official in Sokcho said.

Instead of forgoing sunrise festivals and events, the east coast cities and town said they will refurbish their tourist facilities and strengthen disinfection to help minimize the inconvenience of tourists visiting sunrise hotspots.

In addition, the municipalities will closely communicate with police and firefighters to relieve traffic congestion and prevent safety accidents near major sunrise spots. They will also increase the deployment of safety personnel on popular beaches.

Traditionally, Koreans have attached enormous significance to viewing the year's first sunrise and last sunset to look back on the past year and wish for prosperity and happiness in the coming 12 months. Ideal sunrise spots are mostly located on the eastern coast. 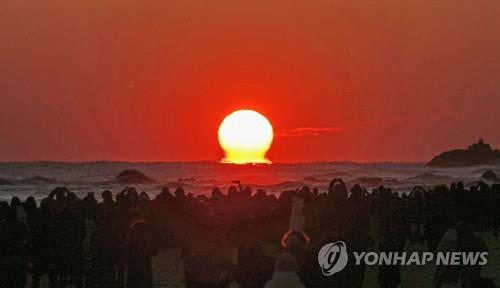 The municipality of Gangneung, 237 km east of Seoul and home to Jeongdongjin Beach and Gyeongpodae Beach, two of the nation's most popular sunrise locations, has decided to drastically scale down its sunrise events.

All official sunrise performances and events, except for the sand clock rotation ceremony at Jeongdongjin, will be canceled, Gangneung officials said, adding they will concentrate on improving the convenience of tourists, including the installation of heat tents on beaches.

The municipality will also offer a live broadcast of the sunrise at its major beaches through YouTube.

"All east coast local governments are in a dilemma because they cannot actively welcome or shun sunrise tourists, particularly due to the impact on the local economy," a Gangneung city government official said.

Meanwhile, the municipalities of Samcheok and Yangyang, located south and north, respectively, of Gangneung, said they have yet to decide whether to cancel their annual sunrise festivals and events, as some of them hold huge symbolic significance in terms of local customs.