The accident occurred near the North Incheon Toll Gate on the Incheon International Airport Expressway shortly before 6 a.m. when a K7 sedan collided with a Cruze sedan from behind before running into a retaining wall. 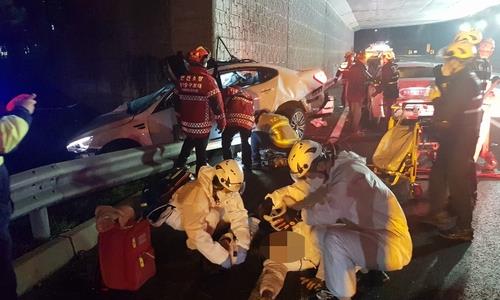 The driver of the K7 car, identified only as a 26-year-old, was killed on the scene, and a 35-year-old front-seat passenger was rushed to a nearby hospital but was pronounced dead there, police said.

The K7 sedan's two back-seat passengers in their teens and the Cruze driver, identified only as a 71-year-old, were injured and hospitalized, police said, adding their injuries are not life-threatening.

At the time of the accident, the K7 vehicle was reportedly running on the second lane after passing through the toll gate, while the Cruze sedan was on the first lane.

Police said they are investigating the exact cause of the crash, without ruling out the possibility of drunk driving or speeding.