The top court upheld an imprisonment of 5 1/2 years and a forfeit of 1.48 billion won (US$1.34 million) for contractor Yoon Jung-cheon, who made headlines years ago for offering bribes and sexual favors to Kim in exchange for information on prosecution investigations into specific cases. 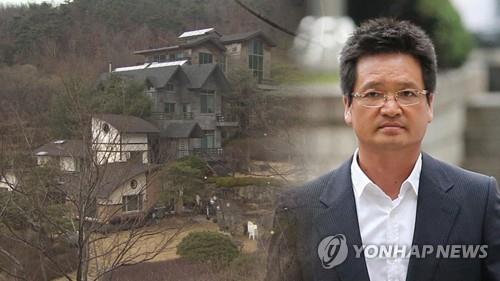 Yoon was indicted in June last year on charges of fraud and sexual offenses related to Kim after a special prosecution team launched a probe into the case following an instruction from President Moon Jae-in in March of the same year.

Kim's sex scandal became publicly known after a video clip was leaked showing a group of men, including one believed to be Kim, having a sex party with about 30 women in a remote villa owned by Yoon.

Yoon was convicted only on the fraud charge, because the statutes of limitations for his sexual offenses have passed.

Yoon was accused of committing fraud worth 4.4 billion won, including extortion of a huge sum from a real estate developer on a false promise to secure a golf course license. He was also charged with coercing a woman to have sex with Kim and other influential figures and raping her between 2006 and 2007.

Last month, Kim was sentenced to a 2 1/2 year prison term from an appellate court for taking some 43 million won in bribes from another businessman. Kim was also acquitted of sexual offense charges related to Yoon because of the expiration of the relevant statutes of limitations.