Trading volume was moderate at about 1.4 billion shares worth some 12.5 trillion won (US$11.3 billion), with gainers outnumbering losers 433 to 393. 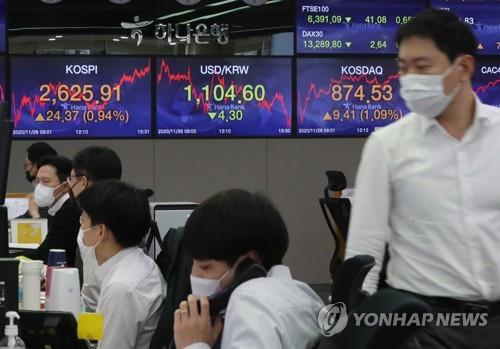 Stocks got off to a weak start on Wall Street losses that stemmed from disappointing U.S. economic indices but gained ground as the Bank of Korea (BOK) slightly revised up this year's economic outlook.

In a widely expected move, the BOK froze the key interest rate at a record low of 0.5 percent.

Tech and battery heavyweights performed strong amid concerns of the third wave of COVID-19 infections.

The local currency closed at 1,104.6 won per dollar, up 4.3 won from the previous session's close.

Bond prices, which move inversely to yields, closed lower. The yield on three-year Treasurys rose 1 basis point to 0.981 percent, and the return on the benchmark five-year government bond added 2.5 basis points to 1.333 percent.