Moon Chung-in, special adviser for diplomatic affairs, made the remark during a virtual seminar with Japanese and South Korean experts, urging Seoul and Tokyo to persuade Beijing and Washington to refrain from escalating tensions.

"If South Korea and Japan cooperate, there will be room for mediation between the U.S. and China," he said.

The adviser also called on the leaders of South Korea, China and Japan to hold a trilateral summit meeting in December, saying that U.S. and China will "not be able to confront one another" amid strengthening cooperation of the three countries.

He added that the incoming Joe Biden administration is likely to engage in talks with China.

"Unlike President Donald Trump's administration, the Biden administration will not reject China in all areas but will selectively accept and reject them, so the door to dialogue is open," he said.

Former Japanese Prime Minister Yukio Hatoyama also called on Tokyo and Seoul to appeal to Washington and Beijing, saying that "peace and prosperity of East Asia should not be left in the hands of the U.S. and China." 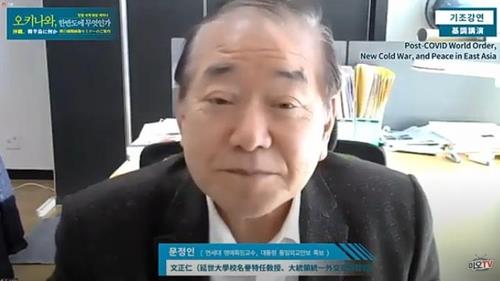