SEOUL, Nov. 27 (Yonhap) -- North Korea has completed the construction of around 2,300 new houses in an eastern mining town hard hit by a strong typhoon this summer, state media reported Friday.

The construction came after the Komdok area of South Hamgyong Province was buffeted by Typhoon Maysak in September, which left the mining town "under muddy water and stones," according to the Korean Central News Agency.

"Single-, low- and multi-storied dwelling houses for 2,300 households, public buildings and parks have been successfully built to turn misfortune into blessings in the area," the KCNA said.

"The big change in the area is the bright fruition brought about by the passionate loving care and dedication made by Supreme Leader Kim Jong Un," the KCNA added.

Kim has shown keen interest in restoring the typhoon-hit town, which is home to zinc, magnetite and other minerals.

Right after the typhoon hit the town, Kim presided over a party meeting to discuss the damage, saying that the restoration of the area is important because it is "an urgent task that should be given top priority for reviving the important arteries of the national economy."

State media earlier reported that more than 2,000 houses and tens of public buildings were destroyed or inundated in the area, while 60,000 meters of roads and 59 bridges collapsed.

North Korea was hit by back-to-back typhoons this summer, which wrought havoc on many areas, including farming regions. They came on top of the country's prolonged fight to stave off the outbreak of the new coronavirus, which is believed to be taking a toll on its already fragile economy. 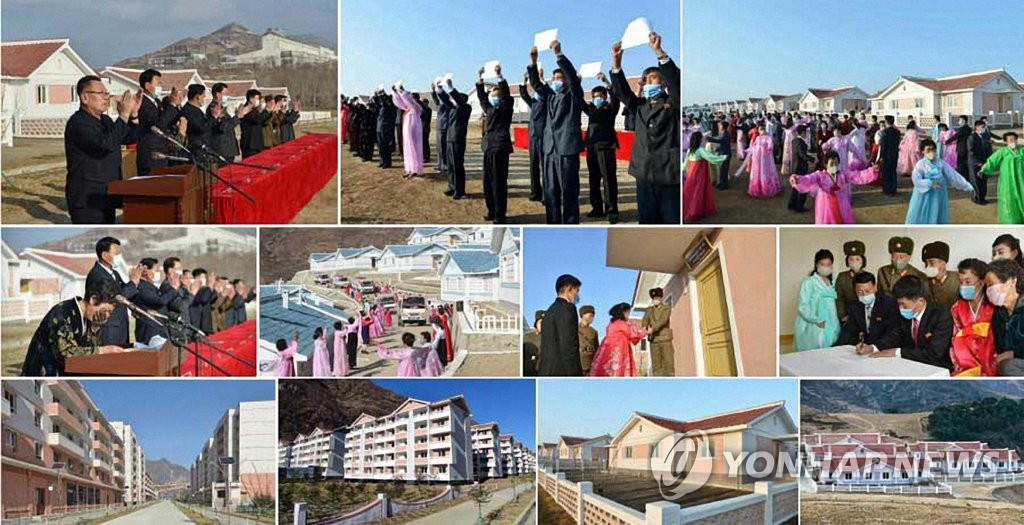