About 70 residents and activists gathered on a bridge leading to the base for the THAAD system in the central town of Seongju, about 300 kilometers southeast of Seoul, to block the approach of dump trucks carrying daily necessities for base troops and construction equipment and materials to be used to improve their living facilities. 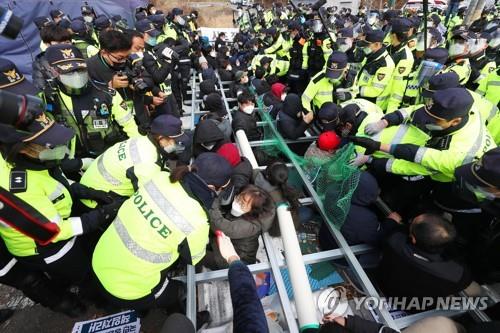 Beginning at noon, about 600 riot police attempted to disperse the protesters, who tied themselves to ladder-like structures installed on the bridge and shouted various slogans against THAAD, but halted the operation about one hour later after an activist climbed up a nearby cliff and threatened to jump into a valley.

Riot police are trying to persuade the activist to walk away from the cliff.

Earlier on Oct. 22, a similar attempt was fiercely resisted by the residents and activists, but the defense ministry managed to complete the transportation of construction equipment and other supplies after riot police dispersed the protesters.