ULLEUNG, South Korea, Nov. 27 (Yonhap) -- The central and local governments on Friday began construction of a new airport at Ulleung Island off the eastern coast.

Some 100 people, including officials from the transport ministry and local governments, attended a groundbreaking ceremony.

The airport, to be completed by 2025, is projected to shorten the travel time between Seoul and Ulleung to one hour from the current seven hours.

The airport is also expected to increase the number of visitors to the island to more than 1 million per year from around 300,000 to 400,000, according to officials.

The central and local governments plan to spend 665.1 billion won (US$602.2 million) to build the airport with a 1.2 kilometer-long runway and a passenger terminal. The airport will cater to airplanes with 50 or less seats.

The government conducted a feasibility study in 2013 and recently completed an environmental impact survey. A consortium led by Daelim Industrial Co. will manage the construction. 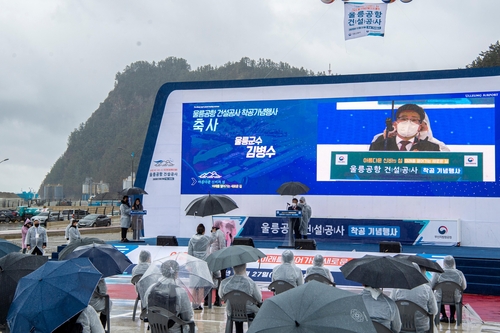