The agriculture ministry said a virus detected from ducks at a farm in Jeongeup, a North Jeolla Province city about 290 kilometers south of Seoul, in a pre-shipment test Thursday has been confirmed as the highly pathogenic bird flu of the H5N8 strain. 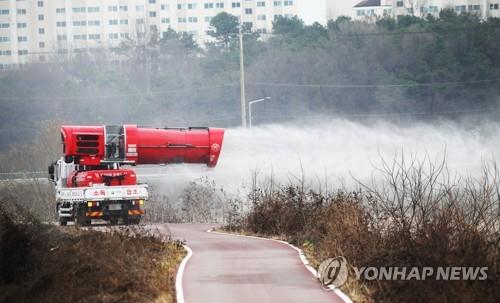 It marked the first confirmed case of highly pathogenic AI detected among domestic poultry in the country this year. All other cases reported so far involved wild birds.

H5N8 is the same subtype of AI detected from among wild birds here this year. It is the first time in about two years and eight months that the highly pathogenic bird flu has broken out at a local poultry farm.

For poultry farms in Jeongeup, the lockdown order will be effective for seven days, it added.

The ministry also banned the trade of live chicks and ducks at all traditional markets nationwide and mandated them to close on Wednesdays for disinfection. It also urged all poultry farms nationwide to strengthen their sterilization work every day and take all possible quarantine measures.

The North Jeolla provincial government announced Saturday that it has culled about 392,000 chickens and ducks at livestock farms located within 3 km of the Jeongeup duck farm as part of its preventive measures.