SEOUL, Nov. 28 (Yonhap) -- An American soldier stationed in South Korea in the city of Dongducheon, north of Seoul, tested positive for the new coronavirus on Saturday, the U.S. military said.

The soldier, based in Camp Casey, is being transported to a hospital at another U.S. Army base in Pyeongtaek, south of the capital, to stay in isolation, according to U.S. Forces Korea (USFK).

Other details, including how the patient was infected, were not immediately available.

The case brought the total number of COVID-19 cases reported among the USFK population to 369, most of whom tested positive upon their arrival here from the United States.

"Contact tracing is ongoing, and USFK medical teams are actively ensuring that all known Camp Casey facilities visited by the Soldier are thoroughly cleaned," USFK said in a release. 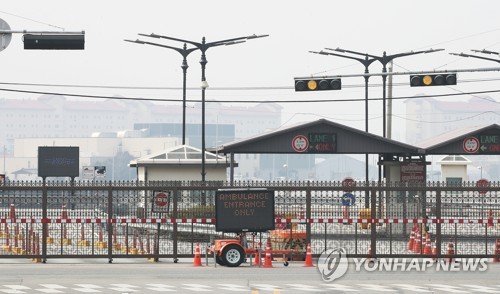 Seen in this file photo is a gate of the U.S. base Camp Humphreys in Pyeongtaek, south of Seoul. (Yonhap)