SEOUL, Nov. 29 (Yonhap) -- South Korea stepped up efforts to curb spread of the highly pathogenic bird flu as the country reported a case at a duck farm for the first time in 32 months, the agriculture ministry said Sunday.

On Saturday, the country confirmed its first case of highly pathogenic avian influenza (AI) of the H5N8 strain among domestic poultry at a duck farm in Jeongeup, a North Jeolla Province city about 290 kilometers south of Seoul.

The last confirmed case at a farm was reported in March 2018, according to the ministry.
"It is very concerning that cases of highly pathogenic bird flu are reported in wild birds as well as at poultry farms," Agriculture Minister Kim Hyun-soo said in a online briefing.

South Korea reported its first confirmed case of the highly pathogenic bird flu in a wild bird on Oct. 21.

The agriculture ministry placed a travel ban on people and cars within a certain radius of the area where the AI strain was discovered and ratcheted up disinfection in affected areas. 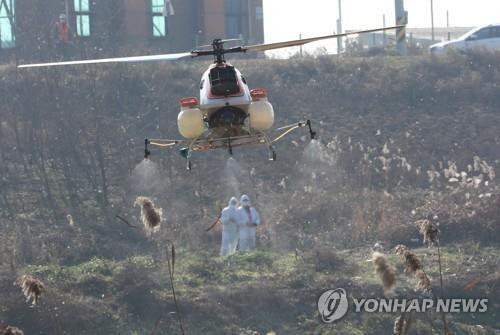