SEOUL, Nov. 29 (Yonhap) -- Output of domestic alcoholic beverages decreased by over 10 percent over the past five years, but imports of alcohol nearly doubled during the same period, government data showed Sunday. 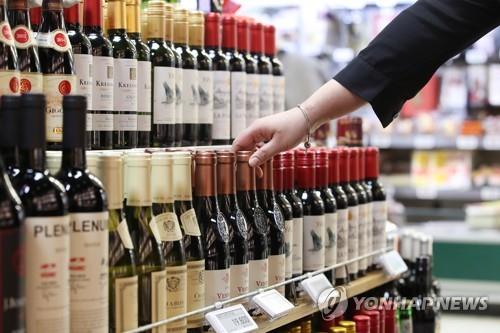 In contrast, a total of 460,000 kiloliters of alcoholic beverages was imported last year, up 125 percent from 2014, the NTS data showed.

The production of local alcoholic beverages had increased starting in 2013, before the latest contraction, partly on the back of consistent demand for soju and other rice wines.

A total of 356,000 kiloliters of beer was imported last year, a nearly twofold increase from 2014, the data showed, despite a movement to boycott Japanese products after Tokyo implemented regulations on exports to Seoul of three key industrial materials in 2019.

Industry watchers forecast wine imports to continue to increase down the road as more people enjoy drinking at home and alone amid the pandemic.

In contrast, imports of whisky and brandy sank 31.5 percent to 12,000 kiloliters in 2019, the data showed, with such imports expected to continue to decrease as people shun drinking at bars due to virus-caused social distancing measures.

Output of domestic alcohol down 10 pct, yet imports double in 5 yrs: data

Output of domestic alcohol down 10 pct, yet imports double in 5 yrs: data