According to the aviation industry sources and the Fair Trade Commission (FTC), the planned merger requires review from authorities in the United States, European Union (EU), China and Japan. 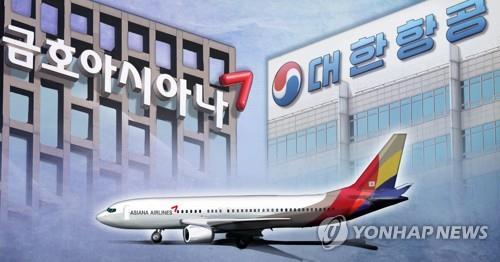 A failure would jeopardize the deal valued at 1.8 trillion won (US$1.6 billion) that would create the world's 10th-biggest airline by fleet.

In the U.S., combined revenue of two companies exceeding $198 million for the latest financial year requires a conditional review for merger clearance from the Department of Justice and the Federal Trade Commission.

Korean Air's revenue in the passenger business for this year's first, second and third quarters reached 1.7 trillion won, with more than 20 percent coming from the U.S. market, they said.

Asiana Airlines does not release revenue data by region, yet its total revenue came to 2.8 trillion won during the cited period, they added.

The combined revenue of Korean Air and Asiana Airlines for this year in the global market surpassed the 8 trillion-won mark, according to the sources.

Mergers and alliances in civil aviation in the European market are considered to be more tricky, the sources said.

The EU previously disapproved a merger of Greece's biggest carriers -- Olympic Air and Aegean Airlines -- citing concerns over a quasi-monopoly of the Greek air transport market.

In China, combined revenue of two companies in the global market exceeding 10 billion yuan also requires merger clearance from the authorities, according to the sources.

In Japan, Korean Air's revenue for the latest financial year in the country exceeds 20 billion yen, meaning the deal requires a merger review, they said.

Also, the sources said further review may be needed in other Southeast Asian countries.

South Korea's antitrust regulator will first review the deal over the issue of monopoly, and it is highly unlikely for overseas authorities to overturn the decision, they added.

Hanjin KAL will then participate in a 2.5 trillion-won stock sale by Korean Air that will be used to acquire Asiana.

Meanwhile, Korean Air has signed a contract to sell one of its non-core assets -- a leisure unit that operates the Wangsan Marina resort in Incheon, 40 kilometers west of Seoul -- for 130 billion won.

Korean Air will complete the sale of its 100-percent stake in Wangsan Leisure Development Co. by the first quarter of next year, according to an industry source.