The benchmark Korea Composite Stock Price Index (KOSPI) closed at an all-time high for the first time in almost three years Tuesday and exceeded the record twice to close at 2,633.45 points Friday.

In November, the KOSPI gained 16.1 percent, which investors hailed as a sign of a "Santa rally."

"The first week of December may undergo an adjustment, but we see enough chances for a year-end rally, including stimulus hopes in Europe and cleared noises from the U.S. presidential election," said Jeong Myung-ji, head of investment and research at Samsung Securities Co. 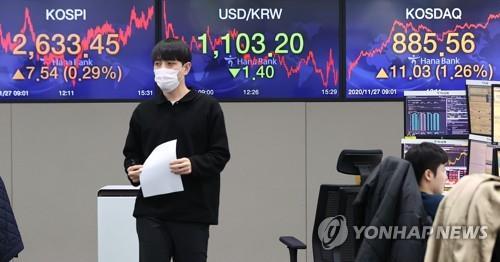 Experts also picked vaccine hopes and the strong local currency against the U.S. dollar as positive factors for a December rally.

Investor sentiment ran high with reports that Pfizer submitted a request for emergency use of its COVID-19 vaccine candidate to the U.S. Food and Drug Administration (FDA).

Analysts said stimulus talks in major countries would speed up with the eased U.S. election uncertainties. The moves are expected to keep the U.S. greenback weak against the Korean won, helping foreigners' buying spree to continue in the local stock markets, they added.

For downside risks in December, experts pointed to increased valuation pressure from the November rally, which may increase retail investors' moves to sell.

According to bourse operator data, the KOSPI fared stronger in January than December over the past 10 years.