A soldier showed symptoms while being quarantined due to an infection cluster at his Army boot camp in the border county of Yeoncheon. The total number of infections there grew to 72, according to the ministry.

"We've wrapped up virus tests for around 800 members at the base and have taken measures to better manage troops there. As contact tracing is under way, more could undergo tests," a ministry official said.

On Sunday, the ministry also reported two COVID-19 cases among the military population.

Up until Monday morning, the military has reported a total of 371 coronavirus cases since the pandemic broke out in the country early this year.

Currently, 2,068 service members are in isolation in accordance with the health authorities' guidelines, and the military has quarantined an additional 2,819 people under stricter antivirus schemes of its own as a preventive step, the ministry said.

Nationwide, the country added 438 more COVID-19 cases, including 414 local infections, raising the total caseload to 34,201, according to the Korea Disease Control and Prevention Agency (KDCA). 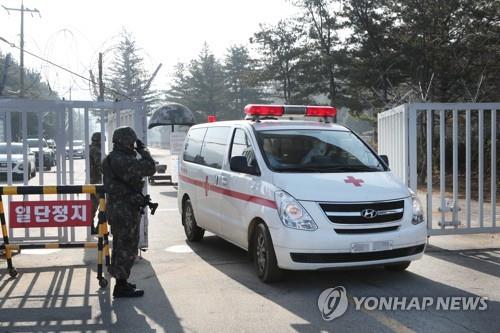