SEOUL, Nov. 30 (Yonhap) -- Prosecutor General Yoon Seok-youl ranked second in a poll of potential presidential candidates released Monday, as his popularity continued to grow amid an escalating feud with the Moon Jae-in administration.

In a Realmeter survey conducted last week, Lee Nak-yon, chairman of the Democratic Party, retained his front-runner position with 20.6 percent. His rating was down 0.9 percentage point from the previous month, marking a decrease for the seventh consecutive month. 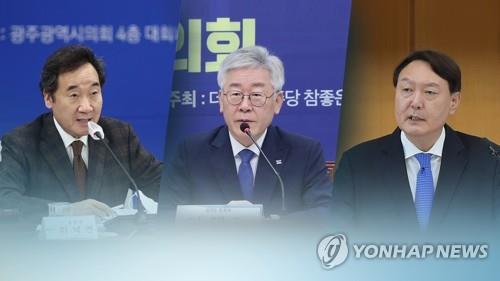 Yoon's support appears to be boosted by a growing conflict between him and Justice Minister Choo Mi-ae.

On Tuesday, Choo suspended Yoon from duty and sought a disciplinary measure over allegations of interference in politically sensitive cases.

"It is analyzed that Justice Minister Choo's suspension of Prosecutor General Yoon played a major role in the hike of his support rating," Bae Cheol-ho, a senior researcher at the company, said.

Yoon has yet to announce his intention to run in the presidential election to be held in 2022.

But he said during a parliamentary session late last month that he would consider how to serve the nation after his retirement. The remark was interpreted as an indication of his willingness to enter politics.

The survey was conducted on 2,538 voters across the country for five days from Monday. It has a margin of error of 1.9 percentage points.
(END)