SEOUL, Nov. 30 (Yonhap) -- U.S. reconnaissance planes flew over South Korea for the past several days in a row, an aviation tracker showed, in an apparent move to monitor North Korea.

The U.S. Air Force's RC-135W Rivet Joint was spotted flying over the western city of Incheon and the metropolitan areas early Monday, according to the tracker, No callsign.

It specializes in detecting telemetry signals before missile launches and analyzing trajectories of warheads.

Later in the day, one EO-5C Crazy Hawk aircraft, along with three A-10 Thunderbolt II fighters and two KC-135R aerial tankers, was also spotted over South Korea.

Over the weekend, the U.S. military flew the E-8C, or JSTARS, over South Korea's Yellow Sea and western regions, according to the aviation tracker.

The E-8C is also known to be capable of closely monitoring the movements of North Korean troops and equipment, including missiles and artillery guns.

Experts say the deployment of those reconnaissance aircraft would be part of their regular operations, but the U.S. might have let some of them be spotted intentionally to send a message of pressure to the North.

"We are closely monitoring North Korean military moves. As of now, there are no signs that indicate imminent provocative moves by the North," an officer of South Korea's Joint Chiefs of Staff (JCS) said. 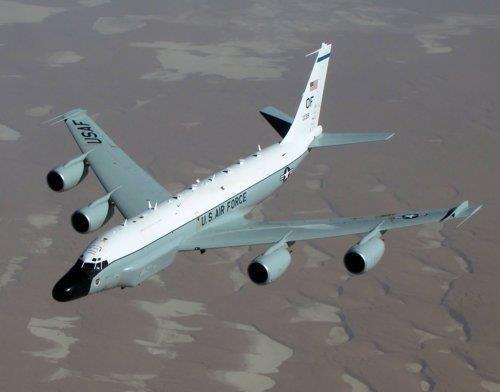