SEOUL, Dec. 1 (Yonhap) -- South Korea and the United States are not just mere friends or allies but "family," and their alliance will remain ironclad based on their deeply shared values, U.S. Ambassador Harry Harris said Tuesday.

Harris made the remarks during a peace conference held in Seoul and via video link to mark the 70th anniversary of the outbreak of the 1950-53 Korean War, saying the alliance between the two countries has only grown stronger since the war.

"The U.S. and other sending states came to the aid of South Korea, helping to defend it from an invasion from the North, and helping South Korea forge its own path to become an exemplary democracy and economic powerhouse," Harris said in his video message.

"The United States and the Republic of Korea are far more than mere friends, or even allies. We are family," the envoy said. "Our alliance is ironclad and always will be."

The alliance has been under a fresh spotlight as U.S. President-elect Joe Biden has pledged to safeguard the value. Seoul and Washington are facing tricky issues, such as negotiations for a defense cost-sharing deal, which has been deadlocked amid the U.S.' demand for a hefty increase in Seoul's payment. 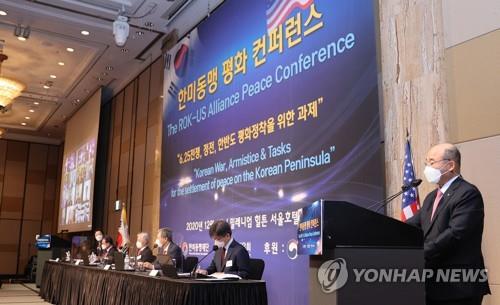 U.S. Veterans Affairs Secretary Robert Wilkie also used his speech as a chance to highlight the sacrifice of service members during the war and the strong bilateral relationship.

"The strength of our alliance is the strongest ever, and we continue to support and assist each other through the hardships of all types, especially in the face of new threats that recognize no national borders," the secretary said.

He then expressed gratitude for South Korea's donation of 500,000 face masks in May for U.S. veterans to help them fight the new coronavirus.

The two-day forum that began Tuesday is hosted by the Korea-US Alliance Foundation and the Korea Defense Veterans Association, and will bring together former senior government and military officials from the two nations as well as renowned experts.

The Korean War broke out on June 25, 1950, after North Korean troops invaded the South, with backing from China and the then Soviet Union. It ended in a truce rather than a peace treaty, leaving the two Koreas technically at war. 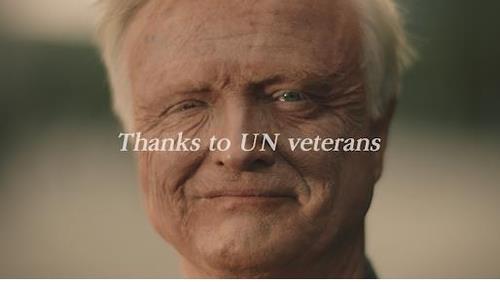 Rep. Min Hong-chul of the ruling Democratic Party, who is also the chairman of the parliamentary defense committee, called for upgrading the alliance in a future-oriented manner.

"The defense cost-sharing deal should be reached at a fair and reasonable level, and the transition of the wartime operational control (OPCON) should be decided in a way that respects South Korea's stance and takes the U.S.' strategies into consideration," the lawmaker said.

"The National Assembly will try to boost exchanges with the U.S. parliament to help further cement and advance the bilateral alliance," he added.

"We will continue to push for reconciliation with North Korea. I believe that there will be progress in peace efforts if the U.S. continues to support us and work together," Park said.

He also expressed gratitude for American and other international service members who sacrificed themselves during the Korean War, and vowed to expand projects for veterans and their descendants.

Keywords
#Koeaa-U.S. alliance
Issue Keywords
Most Liked
Most Saved
Most Viewed All Categories
Most Viewed More
Most Viewed Photos