The KCGI brought the issue to the court last month, arguing that the share sale to the designated third party will damage the Hanjin Group holding firm's existing shareholders' value.

"The planned rights issue appears to be in line with Hanjin Group's plan to acquire Asiana and operate an integrated airline, not aimed at protecting the current Hanjin management's control of the group," the court said in a statement. 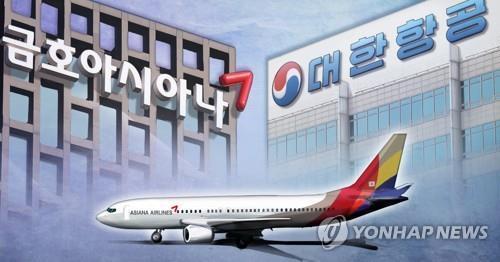 Among other hurdles to be cleared, the merger between the two airlines requires approval from antitrust authorities in at least four countries -- the United States, the European Union, China and Japan.

Of the proceeds, the country's biggest carrier will spend a total of 1.8 trillion won -- 1.5 trillion won for new shares to be sold by Asiana and 300 billion won for Asiana perpetual bonds -- to acquire the second-biggest one.

Hanjin KAL is set to inject the 800 billion won into the Korean Air's rights issue to help the national flag carrier take over Asiana in a deal that would create the world's 10th-biggest airline by fleets.

Under the investment agreement signed last month between the KDB and Hanjin KAL, Cho Won-tae, chairman of Hanjin Group and Korean Air, agreed to provide all of his 6.52 percent stake in Hanjin KAL valued at 170 billion won as security to creditors.

But the alliance failed to dethrone the chairman and appears to have been preparing to oust Chairman Cho at Hanjin KAL's shareholders meeting in March next year. 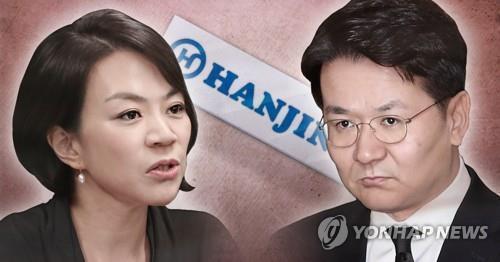 But the KCGI's attempt to oust the chairman may not be easy, as the KDB will have a 10.66 percent stake in Hanjin KAL after investing the 800 billion won in the holding firm.

Korean Air will become Asiana's biggest shareholder with a 63.9 percent stake if the acquisition is completed.

Hit hard by the COVID-19 pandemic, Korean Air and Asiana have suspended most of their flights on international routes since March, and travel demand has dried up.

In the process of the deal, Asiana's heavy debts would remain another drag on Korean Air's proposed takeover.

Meanwhile, KCGI has recently demanded that Hanjin KAL hold an extraordinary shareholders meeting to have the current board members take responsibility for the decision to acquire Asiana and select new directors.