SEOUL, Dec. 1 (Yonhap) -- The military reported four new cases of the coronavirus on Tuesday, the latest in a series of infections at barracks across the country.

An Army officer stationed in the city of Chuncheon, northeast of Seoul, tested positive for COVID-19 after coming into contact with a civilian patient, prompting the authorities to carry out tests for around 180 members of his unit, according to the ministry.

A civilian worker for the Navy in the southern city of Jinhae was confirmed to have been infected upon returning from a recent business trip to Colombia, the ministry said.

One soldier in the border county of Cheorwon and another enlistee in Inje tested positive while quarantining at their bases after coming into contact with colleagues who earlier were confirmed to have been infected, the ministry added.

Up until Tuesday morning, the military has reported a total of 375 coronavirus cases since the pandemic broke out in the country early this year, with the figure growing faster since mid-November.

Currently, 2,081 service members are in isolation in accordance with the health authorities' guidelines, and the military has quarantined an additional 4,018 people under stricter antivirus schemes of its own as a preventive step, according to the ministry.

Nationwide, the country added 451 more COVID-19 cases, including 420 local infections, raising the total caseload to 34,652, according to the Korea Disease Control and Prevention Agency (KDCA). 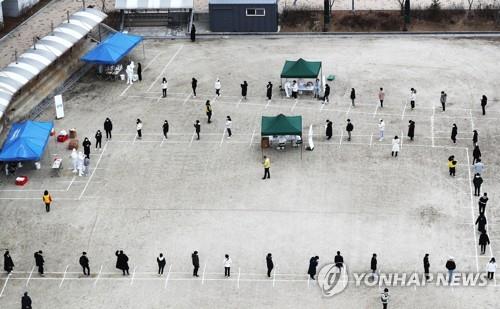