SEOUL, Dec. 1 (Yonhap) -- President Moon Jae-in on Tuesday said South Korea's economy is rebounding strongly from the impact of COVID-19 and could return to the pre-pandemic level in the first half of next year if the current trend continues.

"The trend of the economic rebound since the third quarter is extending powerfully into the fourth quarter as well," Moon said during a weekly Cabinet meeting held at the government complex in Seoul. He presided over the meeting from Cheong Wa Dae through a video link.

Moon added that he "anticipates the economy to recover from the shock sustained from the pandemic and return to its normal trajectory from the first half of next year if the economic recovery trend is sustained until the end of the year."

According to the Bank of Korea, South Korea's real gross domestic product grew 2.1 percent in the July-September period from the previous quarter, marking the fastest expansion in 11 years and the first positive growth in three quarters. 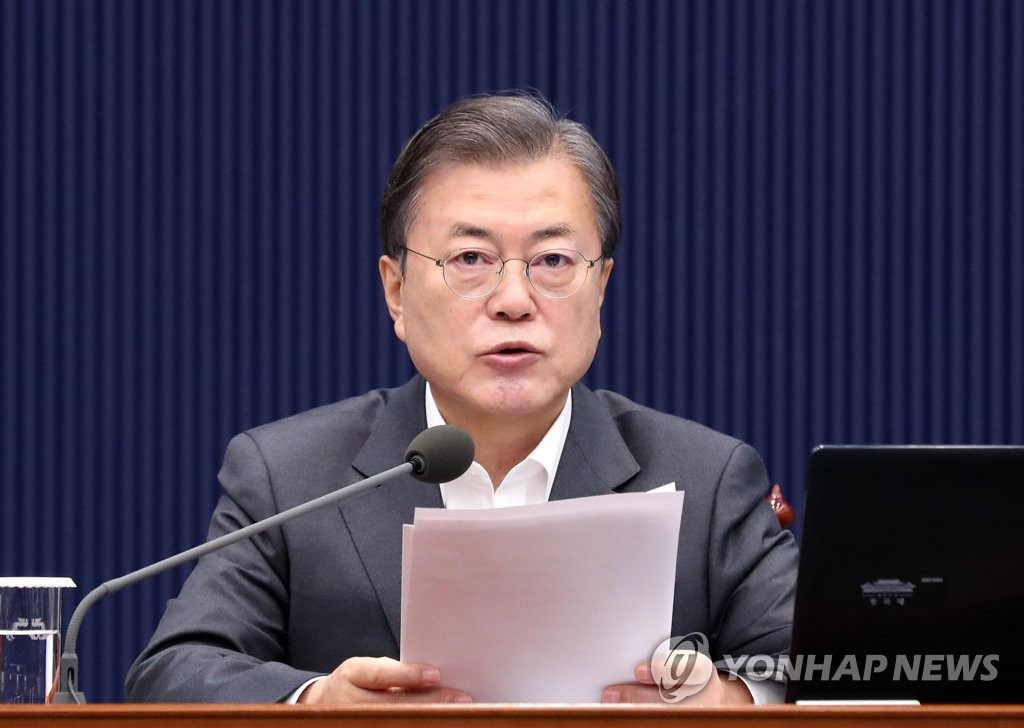 Moon cited the effective antivirus measures by health authorities, the proactive fiscal policies by the government and the introduction of new economic initiatives under the Korea New Deal project as driving the strong economic recovery momentum.

The president especially took note of the strong growth trend of exports.

"The daily average figure and the growth rate for the entire month of November both recorded pluses (net growth) for the first time in 24 months," Moon said.

Moon also lauded the strong upward momentum of the local stock market, highlighting that the growth rate of the benchmark Korea Composite Stock Price Index against its lowest point of the year was the highest among corresponding indexes of Group of 20 nations.

The president, however, expressed alarm over the recent wave of new daily COVID-19 cases, saying that the resurgence of the pandemic could hamper the economy and people's livelihoods.

Moon also asked the National Assembly to cooperate in efforts to resuscitate the economy by moving to pass next year's state budget, for which the legal deadline falls on Wednesday.