SEOUL, Dec. 1 (Yonhap) -- The United States has no plan as of yet to establish a NATO-like regional security headquarters in the Asia Pacific, a State Department official said in an interview video released Tuesday.

Marc Knapper, deputy assistant secretary for Korea and Japan at the East Asian and Pacific affairs bureau, made the remark in a pre-recorded interview with the U.S. Embassy in Seoul, referring to the Quad, a U.S.-led security forum involving Australia, India and Japan.

"At this point, there is no plan to create a regional security headquarters similar to NATO, but certainly we welcome cooperating with other like-minded countries in the region that share our values to address the common challenges that we all face," he said in the video uploaded by the embassy.

The Quad has gained traction amid talk of the possibility that Washington may expand the structure into a multilateral security alliance that includes other regional partners, such as South Korea, as a collective mechanism to counter Chinese aggression.

Washington has dismissed the view that the country is seeking to expand the grouping but said it sees the need to reshape the Quad into a more formalized structure.

On the alliance with South Korea, Knapper expressed hope that people-to-people exchanges between the two countries can resume quickly as the COVID-19 pandemic levels off, saying that such direct communication is vital to further deepening their relationship.

"I sincerely hope that we will be able to overcome the virus ... and we can once again travel as freely as we used to, because I believe the U.S.-Korea relations are built upon the foundation of people-to-people ties," he said.

Regarding North Korea's denuclearization, Knapper reiterated the U.S. position that it remains open to dialogue but Pyongyang must respond to the international calls for the regime to give up its nuclear and missile programs.

"And on this, we and the Moon (Jae-in) administration are in full agreement," he added. 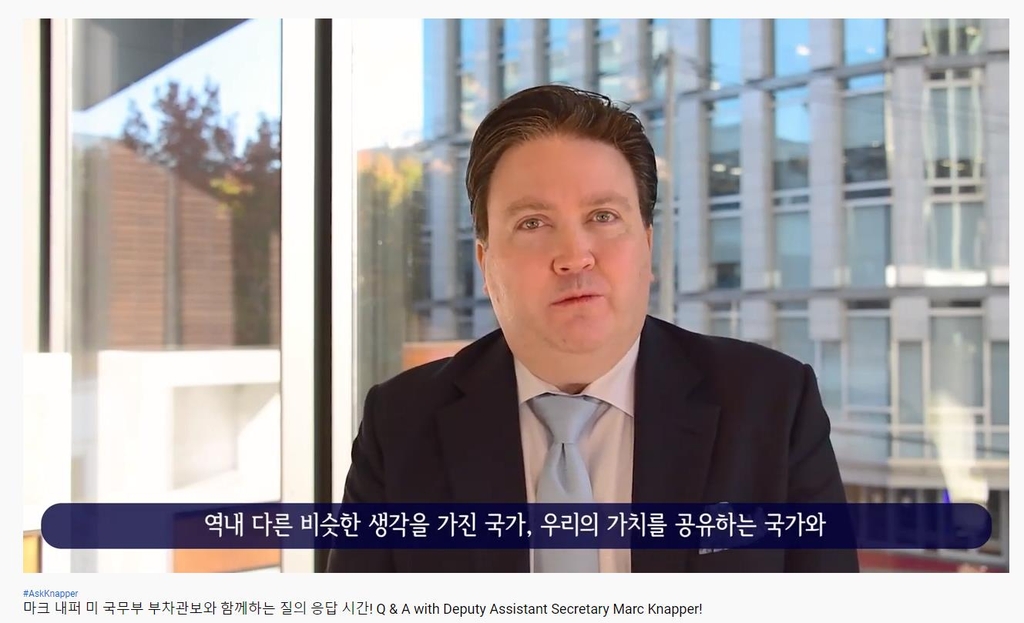 U.S. has no plan to establish NATO-like security headquarters in Asia Pacific: Knapper

U.S. has no plan to establish NATO-like security headquarters in Asia Pacific: Knapper