At its investors' forum held Monday, Samsung revealed that it will apply "extreme two-stack" technology for its future NAND flash chip and that it is possible to develop a 256-layer device.

"Our sixth-generation V-NAND features up to 128 layers with single stack technology, but if we apply a double-stack technology, a 256-layer stacking is mathematically possible," said Han Jin-man, a senior vice president at Samsung's memory business unit, at the forum.

A NAND flash is a type of non-volatile memory that stores data even if power is gone.

In today's NAND flash production, a manufacturer's technological prowess can be measured by the number of memory cell layers stacked in a device, as more layers mean better capacity with enhanced bit density. 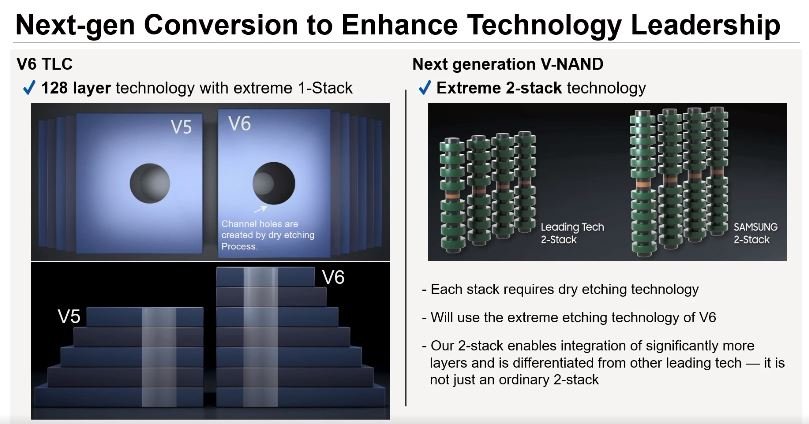 Although 256-layer NAND flash is technologically achievable, Han said that does not necessarily mean that Samsung's next generation NAND will have such a layer configuration.

Samsung is currently developing its seventh generation of V-NAND that is expected to be mass-produced next year, but it has yet to unveil its layer configuration.

"The actual number of layers stacked in the chip could change depending on consumers' needs and market conditions," Han said. "It's not about 'how much you can stack them' but it is about 'what's the most optimal number of layers for the market at this point.'"

Han added the COVID-19 pandemic was a "painful" experience, but it sparked demand for memory chips with digitalization efforts. He predicted demand for both NAND flash and DRAM chips would post robust growth in the upcoming years.

Samsung was the world's top NAND flash maker with a market share of 33.1 percent in the third quarter of the year, followed by Japan's Kioxia Corp. with 21.4 percent and U.S. chipmaker Western Digital Corp. with 14.3 percent, according to market researcher TrendForce.