That result left Jeonbuk at four points with one match remaining and ensured that Jeonbuk will not finish among the top two in the group to qualify for the round of 16. Yokohama (12 points) and Shanghai SIPG (nine points) have locked down the two knockout berths from Group H. 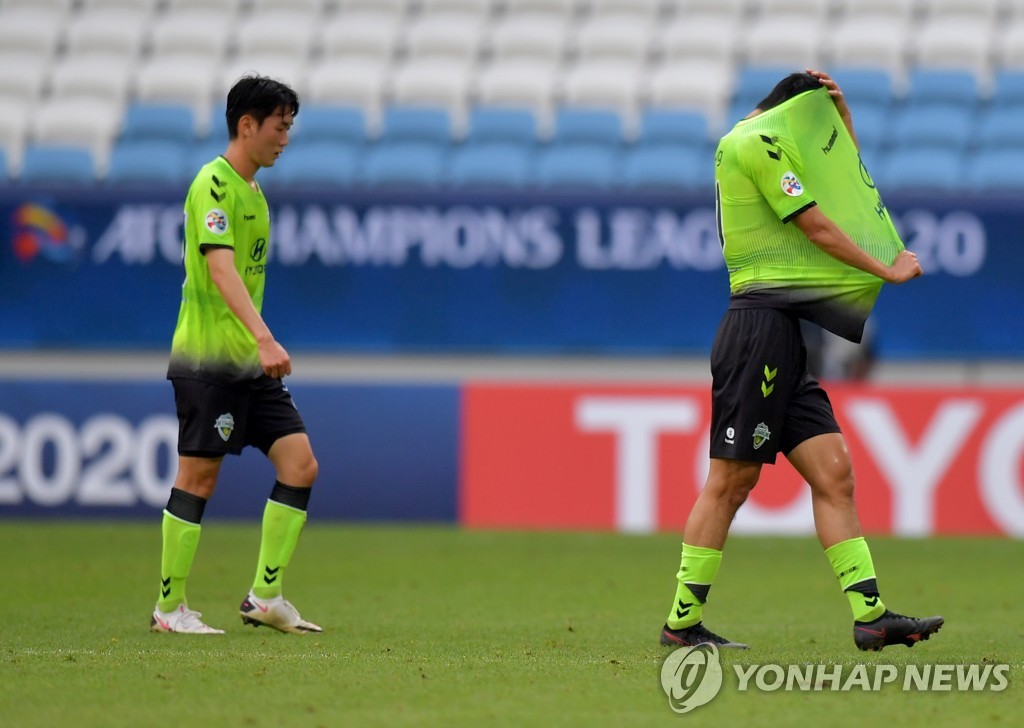 Jeonbuk, which won both the K League 1 and the Korean FA Cup titles in November, were going for their third major title of 2020 in an effort to complete the rare "treble." But they lost the first Group H match to Shanghai on Nov. 22 when the AFC Champions League resumed in Qatar following a coronavirus-induced hiatus, and a humiliating loss to Yokohama sealed Jeonbuk's fate.

Entering Tuesday's match, Jeonbuk weren't even in control of their own fate. They had to beat Yokohama and get some help from other clubs to make it to the knockouts.

Instead, Yokohama opened the scoring with Theerathon Bunmathan's goal in the 17th minute, and Marcos Junior doubled their lead in the 51st minute. 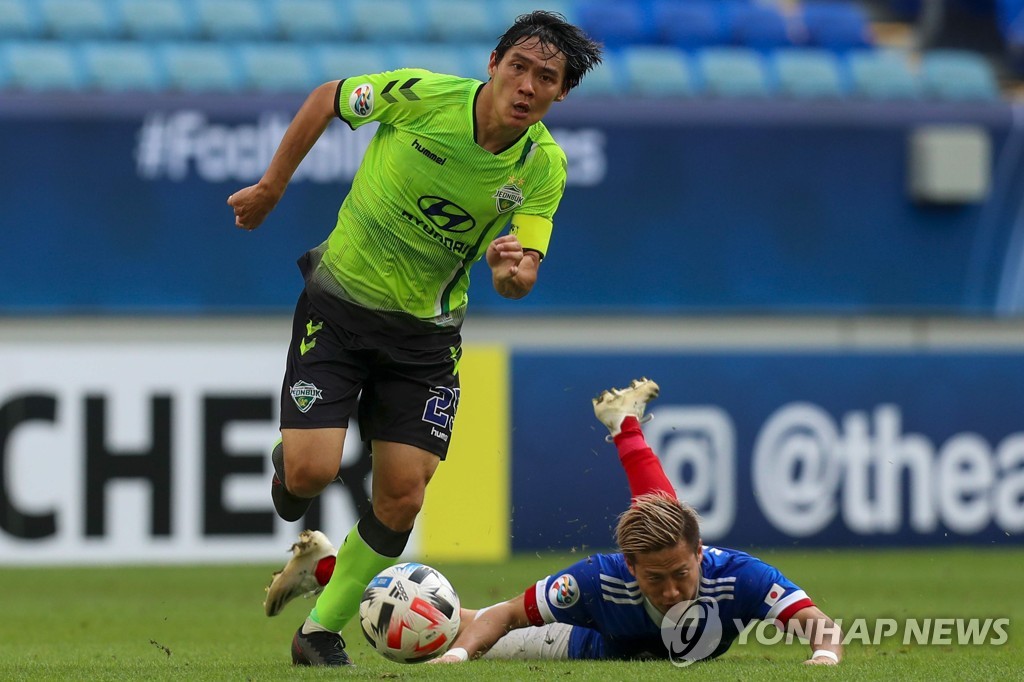 Jeonbuk cut the deficit in half with Gustavo's penalty three minutes later, but Yokohama got the next two goals to round out the scoring. The fourth was an own goal by Jeonbuk goalkeeper Song Bum-keun, who had a shot go off the left goal post and then his head and in.

Jeonbuk were severely shorthanded for the AFC Champions League. The K League MVP Son Jun-ho and defender Lee Ju-yong were both missing following their recent international duty. Both played for the national team in November in Austria, where seven of their teammates tested positive for COVID-19. Instead of joining Jeonbuk in Qatar, Son and Lee returned to South Korea to serve their quarantine.

"If we had played with our full squad, we wouldn't have had results like these," Jeonbuk head coach Jose Morais said at his press conference Tuesday. "The players that we had did their best, but we were missing a lot of players who won the K League and the FA Cup titles. I hope I will never have to coach in another tournament with so many players missing."

Morais said one positive takeaway may be that young players got to experience the tournament action in a tough group, but added: "It's not as though I gave them an opportunity to play. I had no choice but to deploy those young players."

Also on Tuesday, one other K League club, Suwon Samsung Bluewings, kept their knockout hopes alive with a 1-1 draw against Guangzhou Evergrande in Group G. 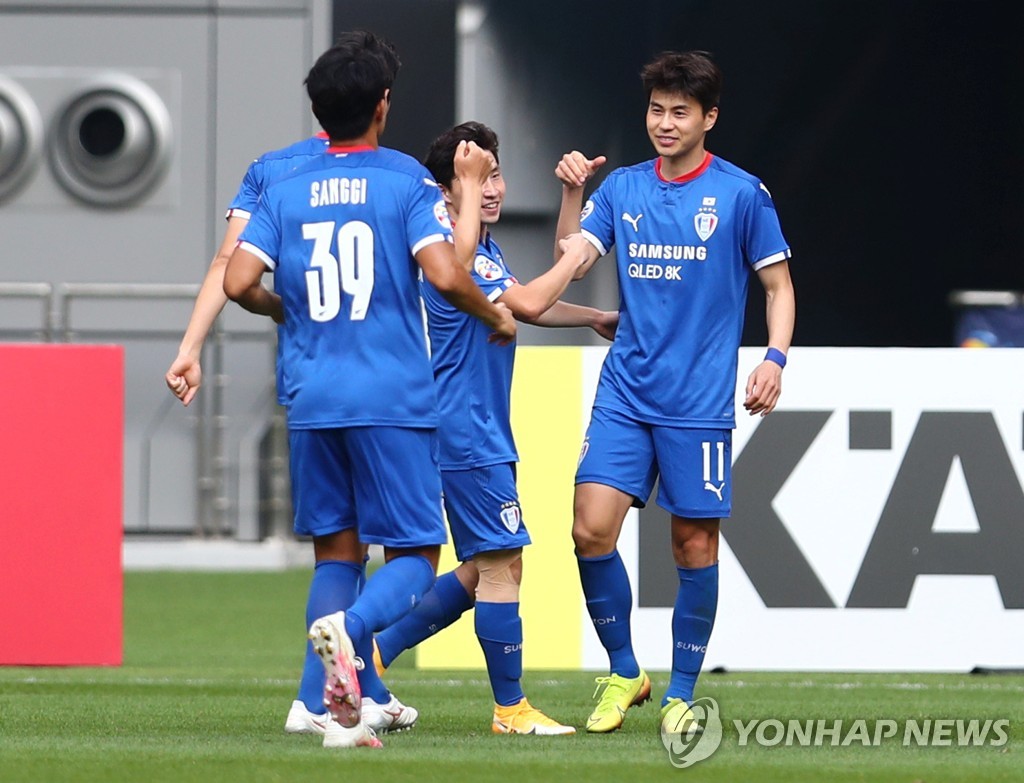 Lim Sang-hyub for Suwon and Wei Shihao for Guangzhou traded a goal apiece at Khalifa International Stadium in Doha.

Suwon sit in third place with two points with one match to go. Guangzhou are in second place with five points from four matches.

Group G only has three clubs left without the Malaysian club Johor Darul Ta'zim, which have withdrawn from the tournament after their government declined to authorize their trip to Qatar.

Guangzhou were scheduled to face Johor next but instead that match has been canceled and will not factor into the group picture. Suwon's final group match is a must-win contest against Vissel Kobe in Doha on Friday.

A victory will pull Suwon level with Guangzhou at five points and the two will then go to tiebreakers to determine which team gets to play in the round of 16. Guangzhou have a slim edge in goal difference, zero to minus-1, and are also ahead in goals scored, 4-1. 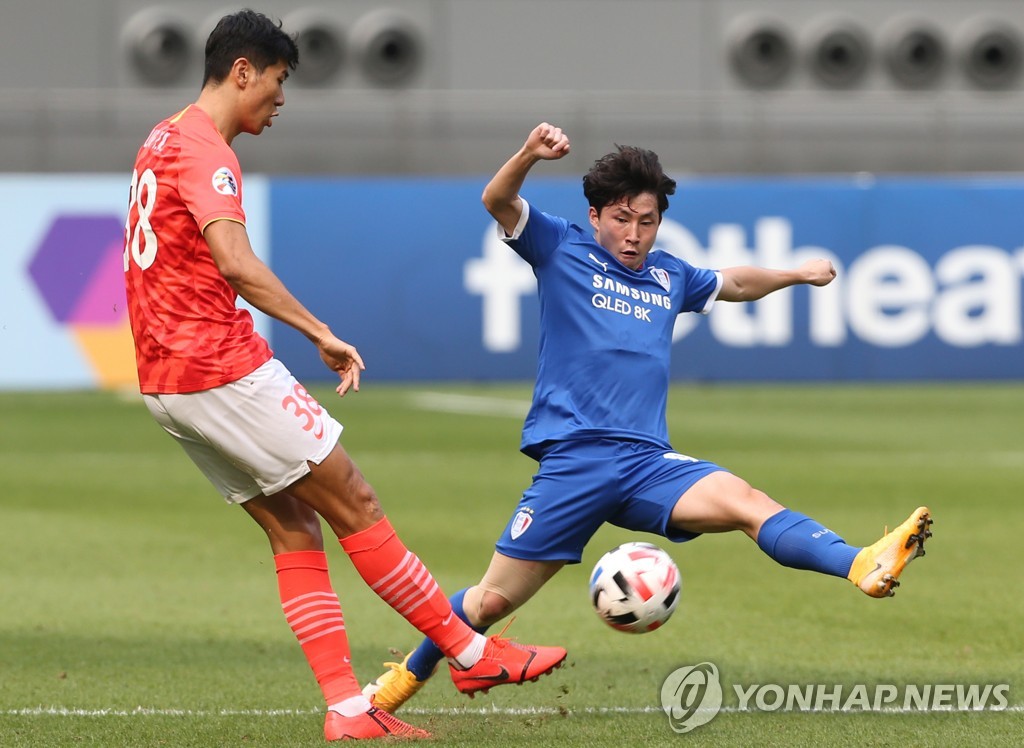