SEOUL, Dec. 2 (Yonhap) -- The United States was "encouraged" by recent efforts by South Korea and Japan to "address their differences," a State Department official said Wednesday, highlighting the need for trilateral cooperation against North Korean nuclear and missile threats.

Marc Knapper, deputy assistant secretary for Korea and Japan at the East Asian and Pacific affairs bureau, made the remark in a webinar, apparently referring to a series of visits to Japan by senior South Korean officials on the occasion of the launch of the Yoshihide Suga administration.

"We are encouraged by South Korea and Japan's recent sincere discussions to address their differences to hopefully find a path forward for more constructive and productive relations," Knapper said. 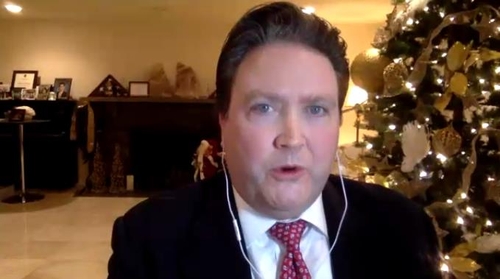 Moon's choice of Kang, who has a wide web of personal networks in Japan, reflects the president's will to normalize Seoul-Tokyo relations in cooperation with the Suga government, according to a Cheong Wa Dae official.

"The U.S. will continue to pursue bilateral and trilateral security and other cooperation with South Korea and Japan in recognition of our shared interests, particularly as we together seek to address the North Korean nuclear and missile threats," Knapper said, calling the South Korea-U.S. alliance the "linchpin" of peace and security in the Indo-Pacific region.

The U.S. diplomat also used Wednesday's event to keep China in check, highlighting American companies' investment in South Korea over the decades, which he said "contributed to the growth of some of the largest and most important industries" in the Asian country.

"The same cannot be said about the People's Republic of China whose investment in ROK is minimal, barely 3 percent of the total foreign direct investment in South Korea. The United States is at 15 percent," he said. ROK stands for South Korea's official name, the Republic of Korea.

The webinar was co-hosted by the Korea-U.S. Alliance Foundation and the Korea Defense Veterans Association to mark the 70th anniversary of the 1950-53 Korean War's outbreak.

In a guest speech, Defense Minister Suh Wook said South Korea and the U.S. will maintain an "ironclad" combined defense posture, vowing to continue the push to transfer the wartime operational control of South Korean troops from Washington to Seoul.