It marks the first national budget approved by the National Assembly within the legal deadline since 2014, as fierce partisan wrangling often made it difficult to pass such bills on time.

This year's prompt budget passage signifies rival parties' keen sense of urgency for the need to help the country ride out the COVID-19 pandemic and its economic devastation. 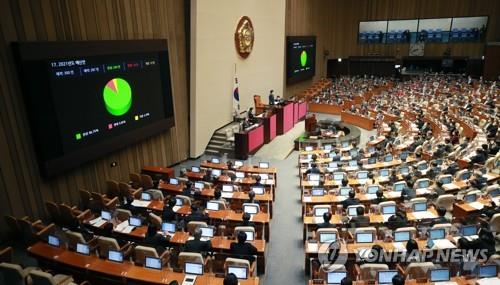 The ruling Democratic Party (DP) and the main opposition People Power Party (PPP) together negotiated the inclusion of 3.9 trillion won to the government-proposed budget, to provide the country's third round of COVID-19 emergency relief funds and purchase coronavirus vaccines.

Three trillion won will be used to financially help small business owners and others hit hard by the recent resurgence of coronavirus infections and the rest will be spent to vaccinate some 44 million people.

The approved budget represents an increase of 2.2 trillion won from what the government initially proposed in September, before the recent third wave of mass virus infections.

The 2021 budget marks the most annual government spending the National Assembly has approved and an increase of 8.9 percent from this year's state budget of 512.3 trillion won.

The government allocated nearly 70 trillion won more this year for four rounds of extra budgets in its battle against COVID-19.

The approved 2021 government spending would push up South Korea's sovereign debts to 956 trillion won, which accounts for 47.3 percent of its gross domestic product, according to ruling party officials.

The plenary session also passed a revision to the Income Tax Act that raises the maximum income tax rate on those whose annual earnings reach 1 billion won to 45 percent from the current 42 percent.

The revision also empowers the government to levy a 20 percent tax on annual incomes of more than 2.5 million won earned through cryptocurrency, starting in 2022.