WASHINGTON, Dec. 2 (Yonhap) -- North Korea continues to develop its nuclear and long-range missile capabilities, but so are South Korea and the United States to deter provocations, the top U.S. military officer said Wednesday.

Gen. Mark Milley, chairman of the U.S. Joint Chiefs of Staff, also noted the communist state may stage military provocations but said the allies are fully ready and capable to deal with any provocation.

"It is also true that North Korea has advanced their nuclear weapon and missile delivery capabilities. But the deterrence capabilities of not only the Republic of Korea, but also in combination with Japan and most importantly with the United States is very, very significant," the top U.S. military leader said in a webinar hosted by the Washington-based Brookings Institution think tank. 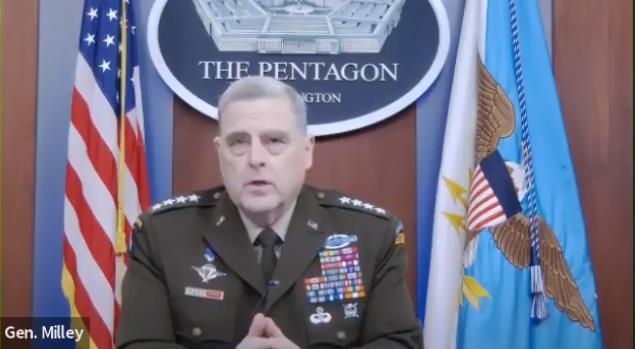 Pyongyang has maintained a self-imposed moratorium on nuclear and long-range missile testing since November 2017.

The communist state, however, unveiled a longer-range intercontinental ballistic missile in an Oct. 10 military parade, indicating its continued weapons development despite the near two-year halt in testing.

Milley noted the North may be facing a "wide variety of challenges" internally but that it may resume its military provocations in the future.

"That's very possible. I mean they have got a long history of doing things like that," he said.

Many officials and experts here have pointed to the possibility of North Korea trying to test the incoming U.S. administration with military provocations that they say are in "their playbook."

President-elect Joe Biden is set to be inaugurated on Jan. 20.

The head of the U.S. Joint Chiefs of Staff said the U.S. and South Korea stand ready and capable to counter any North Korean provocation.

"I think we have adequate vigilance. We are monitoring the situation closely as we always do with North Korea, and we have adequate military capabilities to deal with whatever might come our way," said Milley.

He also highlighted the strength of the Korea-U.S. alliance.

"I think the alliance between the United States and the Republic of Korea is very strong...We have 28,500 troops in South Korea with significant capabilities and the ROK military is very significant. It is one of the better militaries in the world, in fact," he told the seminar.