CHEONGJU, South Korea, Dec. 3 (Yonhap) -- A provincial government in central South Korea said Thursday it has decided to retain the statues of former Presidents Chun Doo-hwan and Roh Tae-woo at a local park, dismissing a civic group's request for their removal.

The government of North Chungcheong Province announced the decision to keep intact the controversial statues of Chun and Roh installed at the Cheongnamdae Presidential Villa, a lakeside park formerly used by presidents as their summer retreat, in the province's capital of Cheongju, about 140 kilometers south of Seoul. 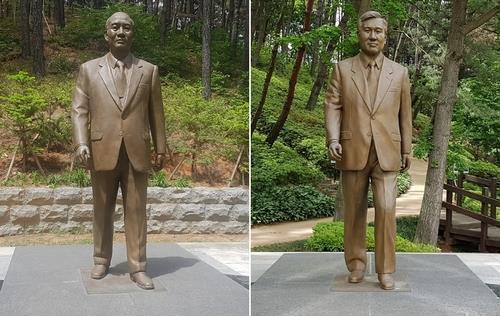 The decision came after a local civic group commemorating the May 1980 pro-democracy uprising in Gwangju, which Chun and Roh were accused of suppressing in a bloody crackdown, persistently demanded the two statues be dismantled to punish them for their massacres of pro-democracy activists.

Yielding to parts of the civic group's requests, however, the provincial government said it will install signboards stating the two former presidents' judicial punishments in front of the statues.

The military ruthlessly cracked down on the Gwangju uprising, which started on May 18, 1980, in protest against Chun and Roh, leaving more than 200 people dead and 1,800 others wounded, according to official data.

Chun and Roh have been deprived of privileges as former presidents due to their criminal punishments on treason and bribery charges.

Cheongnamdae was built in 1983 during Chun's presidency and opened to the public in 2003. To attract tourists, the provincial government erected statues of nine former presidents, including Chun and Roh, in 2015.

Gov. Lee Si-jong said in an online briefing that his government has struck on the midpoint between preservation and removal of the two statues by deciding to install signboards on the two former presidents' misconduct.

The governor said his government was not able to ignore preservation requests particularly from neighboring residents, many of whom rely on tourism revenues related to Cheongnamdae for their livelihoods.

Lee said a provincial advisory committee will also deliberate on how to handle the statue of former President Lee Myung-bak, who was recently sentenced to 17 years in prison on embezzlement and bribery charges.

The governor also called for leniency for a man who was arrested last month for vandalizing Chun's statue at Cheongnamdae.