SEOUL, Dec. 3 (Yonhap) -- The Ministry of Justice said Thursday that it decided to postpone a meeting to discuss disciplinary measures against the country's chief prosecutor to next week amid increasing backlash over what has been slammed as hasty procedures.

"Justice Minister Choo Mi-ae decided to accept the prosecutor general's request to postpone the date and rescheduled it to Dec. 10 to guarantee his right to defend," the ministry said in a statement.

The announcement came soon after President Moon Jae-in emphasized procedural legitimacy and fairness in operating the disciplinary committee, originally slated to meet on Friday, against Prosecutor General Yoon Seok-youl. The meeting was already postponed once.

Yoon has demanded the meeting be rescheduled to a later date, citing a procedural error and the ministry's uncooperative attitude towards sharing documents related to his alleged misdeeds.

As the culmination of yearlong tension between the two over a series of controversial investigations, the minister suspended Yoon from duty earlier last week and said she would discipline him over six counts of alleged misdeeds, including collecting personal data of justices in charge of politically sensitive cases.

But Yoon has been restored to his position after a court on Tuesday accepted his injunction request on the ground that suspending Yoon from duty was tantamount to dismissing him, which damaged the prosecution's core principles of neutrality and independence.

On the same day, the ministry's inspection committee also took Yoon's side by advising against the suspension during a three-hour meeting, citing "procedural flaws." 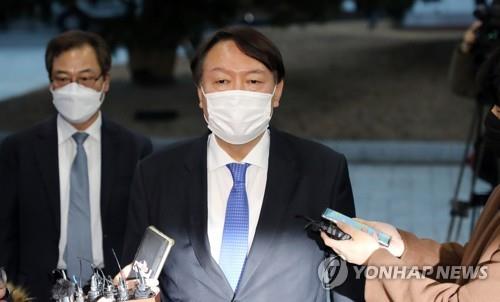