WASHINGTON, Dec. 3 (Yonhap) -- The United States and South Korea can and must work together to promote their shared values and check China's growing influence in the Indo-Pacific region, a U.S. diplomat said Thursday.

A South Korean diplomat here agreed on the need for the allies to work together, but highlighted the importance of first laying out their common goals.

"We have a long standing cooperative relationship and one that I foresee going forward, I mean, because basically it comes down to the kind of values and principles our two countries share in terms of transparency and openness and support for innovation and commitment to fostering a digital economy, in which data is able to flow freely but also securely," said Marc Knapper, deputy assistant secretary of state for Korea and Japan.

"And so there is absolutely, I think going forward, a role for the United States and Korea to work together, especially as we work on standards and in setting global standards," he added while speaking in a webinar hosted by the Washington-based Atlantic Council and sponsored by the Korea Foundation. 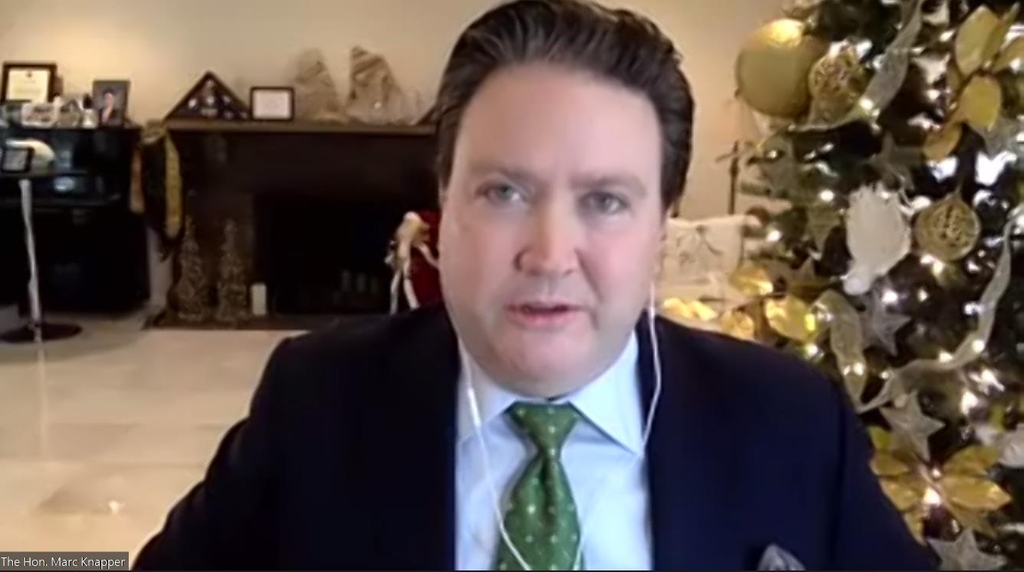 "You know it is focused on the three pillars of Ps -- peace, people and prosperity," he said of the South Korean foreign policy initiative.

"(It) seemed to us like a perfect fit with our own Indo-Pacific strategy, which of course has as its principles of openness, inclusiveness, transparency, good governance, respect for international norms, focus on ASEAN centrality," he added, referring to the Association of Southeast Asian Nations.

The United States has been urging South Korea to take part in a multilateral structure known as the Quad, which currently includes Australia, Japan and India, to build a Quad Plus that it says will counter what it calls Chinese aggression in the region.

Both Washington and Seoul note that no formal invitation has been extended to South Korea to join the regional dialogue.

"That (New Southern Policy) is also part of our kind of decoupling from too much dependence on (the) Chinese market, in trading relationship with China. So our focus is more as a geo-economic aspect," he told the virtual seminar.

"When I look at the U.S. Indo-Pacific strategy, (that) has the economic aspect but it also emphasizes your strategic aspect of the United States. So the dilemma is that how we can combine those two aspects like geoeconomic and geopolitical aspects," added Moon.

"I can see the necessity for the kind of technological trade blocs and others around the competition vis-a-vis China, but I am just wondering how much it can be feasible, considering so interconnectedness of the all the economies with China," he said.

Moon also underscored the need to include more countries in dealing with China.

"I just want to (make) just one more point that we also need to include Japan in our bilateral combining strategy. So how we, I mean Korea and the United States, can work together with Japan also, to promote, I mean, our ultimate agenda of prosperity and peace in this region of the world," he said.