SEJONG, Dec. 5 (Yonhap) -- Nearly 15 billion won (US$13.7 million) has been set aside from state budgets to launch a project to partly relocate the National Assembly in Seoul to the administrative city of Sejong.

According to the Sejong municipality, the 2021 national budget, approved by the assembly earlier this week, includes 12.7 billion won earmarked for the initial design of the envisioned Sejong National Assembly.

Including the unused 2 billion-won budget allotted for the relocation project this year and last year, a total of 14.7 billion won will be available next year for launching the project whose total costs reach more than 1.4 trillion won.

The latest budget allocation is expected to give traction to the drawn-out relocation project aimed at decentralizing the power of the capital Seoul and spearheaded by the ruling Democratic Party.

The budget will be executed after related bills, including a proposed revision to the National Assembly Act, are approved by the assembly, city officials said.

According to a proposal by the National Assembly Secretariat last year, the parliament's budget and accounts committee, as well as 11 other standing committees that oversee government ministries based in Sejong, are highly likely to relocate to Sejong if the project is completed.

The assembly's several major departments, including the secretariat, are also under review for relocation, which, if carried out as proposed, will move about two-thirds of the chamber's total functions to Sejong.

A 616,000-square-meter section of land near the government office complex in Sejong has been proposed as a site to host the Sejong assembly.

"(The city) will draw up the basic plan for building (the Sejong National Assembly) as soon as decisions are made on details next year, including the scope of the relocation," Sejong Mayor Lee Choon-hee said. 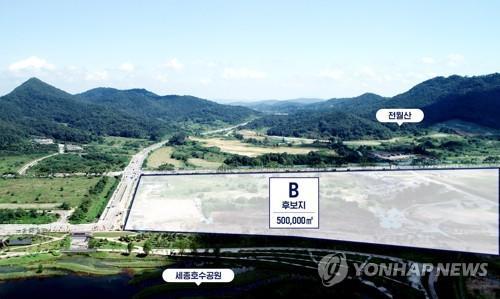