SEOUL, Dec. 4 (Yonhap) -- South Korea's currency continued to gain ground against the U.S. dollar Friday, as the risk appetite is growing over signs of progress in U.S. stimulus talks and developments of coronavirus vaccines.

The won, along with other peers, has strengthened against the U.S. dollar due to optimism over vaccine developments, with U.S. President-elect Joe Biden promising to swiftly deal with stimulus packages.

Jeon Seung-ji, a currency analyst at Samsung Futures Inc., said the won is expected to test the 1,090 won level Friday, depending on whether foreign investors would become net buyers of local stocks.

Analysts have said the U.S. dollar's weakening may continue for the time being as investors sold safe-haven assets over developments of coronavirus vaccines. 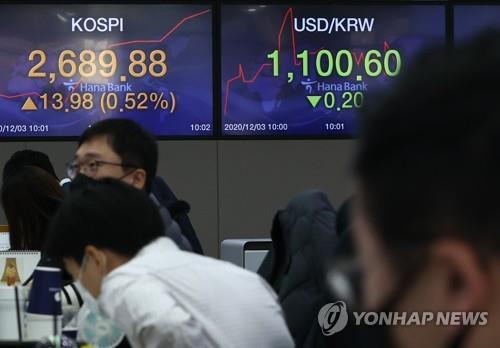