SEOUL, Dec. 4 (Yonhap) -- The number of working mothers with underage children fell by the most during the six-month period ending in April as the job market remained sluggish amid the new coronavirus outbreak, data showed Friday.

The number of working mothers with children aged under 18 reached 2.67 million as of end-April, down 5.5 percent from a year earlier, according to the data by Statistics Korea.

It marked the sharpest decline since 2016, when the statistics agency began compiling related data.

The fall was mainly attributable to a decline in the number of married women and the fallout of the COVID-19 pandemic, according to the statistics agency.

The virus outbreak has dented face-to-face service sectors, in which many married women work, it added.

Accordingly, the employment rate for such working mothers reached 55.5 percent in the November 2019-April 2020 period, down 1.5 percentage points from a year earlier.

The portion of such women who worked or sought to find jobs also fell to 56.8 percent in the cited period, down 1.6 percentage points from the previous year. 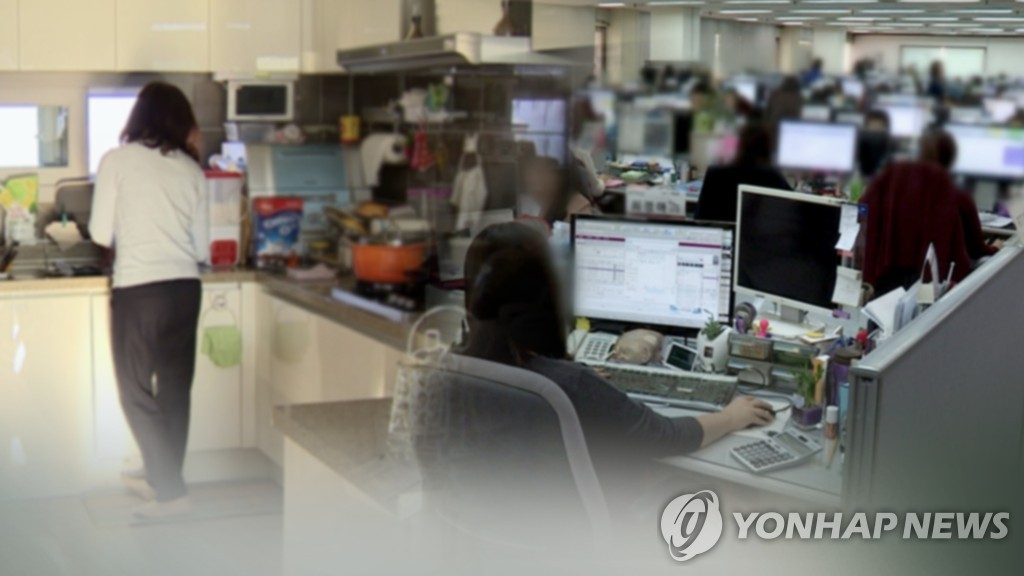 The number of working mothers with underaged children reached 4.81 million as of the end of April, accounting for 56.1 percent of all married women.

This year South Korea's job market has remained bleak due to the fallout of the new coronavirus outbreak, with the country reporting job losses every month since March. In April, the country lost about 467,000 jobs, marking the sharpest monthly decline in more than 21 years.

By industry, the number of such working moms who worked in the retail, food and accommodation sectors declined by 70,000 from a year earlier, while that of the women engaged in the self-employed business or the public service segment fell by 56,000, according to the data.

Of the working moms, the number of regular workers reached 1.66 million, accounting for 76.6 percent, while that of temporary workers came to 507,000, or 23.4 percent of the total.

About 40 percent of the working mothers earned less than 2 million won (US$1,800) per month, the data showed.

The portion of the mothers earning less than 1 million won came to 8.4 percent and that of the working mothers who earned monthly pay of 1-2 million won accounted for 30.9 percent.

(LEAD) No. of working moms with underage children dips by most amid pandemic

(LEAD) No. of working moms with underage children dips by most amid pandemic