SEOUL, Dec. 4 (Yonhap) -- South Korea's top prosecutor filed a complaint on Friday with the Constitutional Court, taking issue with the "unfairness" of the prosecutor disciplinary act under which the justice minister seeks to punish him.

Lee Wan-kyu, the lawyer for Prosecutor General Yoon Seok-youl, told reporters that some provisions of the act were "against the Constitution" as they seriously harm the fairness of the operation of a disciplinary committee.

In Yoon's case, the justice minister is the one who has sought to discipline him in the first place, but she also gets to pick most of the committee members. "Fairness cannot be guaranteed at all" in such circumstances, Lee said.

Yoon has also filed an injunction to put off his disciplinary meeting, scheduled for Thursday, until the Constitutional Court metes out a verdict on the case.

The prosecution chief has been going at full force to strike back at Justice Minister Choo Mi-ae. The two have been at odds over a series of politically sensitive cases and prosecution reform.

As the culmination of yearlong tension between the two, the minister suspended Yoon from duty earlier last week and said she would discipline him over six counts of alleged misdeeds, including collecting personal data of justices in charge of politically sensitive cases.

But Yoon has been restored to his position after a court on Tuesday accepted his injunction request on the ground that suspending Yoon from duty was tantamount to dismissing him, which damaged the prosecution's core principles of neutrality and independence.

On the same day, the ministry's inspection committee also took Yoon's side by advising against the suspension during a three-hour meeting, citing "procedural flaws." 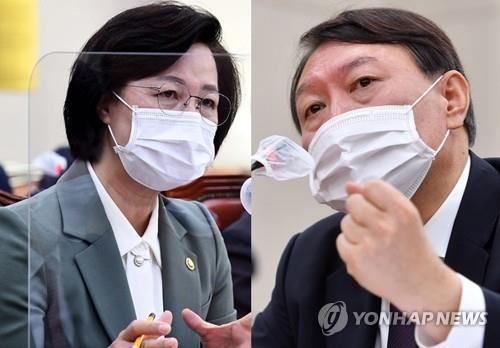