Three soldiers at an Army boot camp in the border county of Yeoncheon tested positive while being quarantined, bringing the number of total patients there to 80, according to the defense ministry.

One Army officer and a Marine at the Sangmudae Artillery School in the southwestern county of Jangseong also tested positive after coming into contact with their colleagues who were infected earlier, the ministry said.

The total COVID-19 cases reported at Sangmudae has grown to 23.

An Army officer stationed in Seoul was also confirmed to have been infected, and contact tracing is under way, it added.

Up until Saturday morning, the military has reported a total of 402 coronavirus cases since the pandemic broke out in the country early this year, with the figure growing faster since mid-November.

Nationwide, the country added 583 more COVID-19 cases, including 559 local infections, raising the total caseload to 36,915, according to the Korea Disease Control and Prevention Agency (KDCA). It reported four additional coronavirus fatalities, bringing the total to 540. 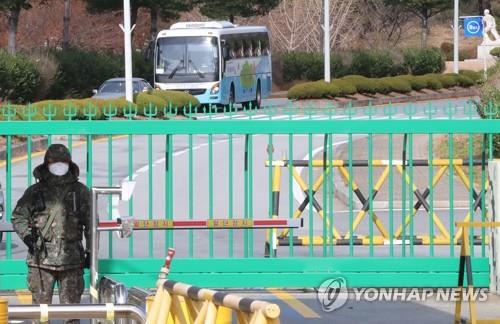