SEOUL, Dec. 7 (Yonhap) -- A new access control system utilizing artificial intelligence (AI) face recognition and quick response (QR) code technologies will be introduced to government buildings to enhance their security and improve the convenience of visitors, as well as civil servants, the Ministry of the Interior and Safety said Monday.

The new entry log system will be test-operated in parts of the government complex in the central administrative city of Sejong and later expanded to other government buildings in Seoul and other cities, according to the ministry.

The AI-based face recognition system for public officials will be installed in Building 3 of the Sejong complex, it said. Currently, the officials have to verify both their face and identification cards, but under the new system, they only have to pass the AI face recognition to enter the building.

The ministry said the change will also help prevent the spread of infectious diseases by minimizing human contact, while enabling the introduction of different services, such as automatic body temperature checks. 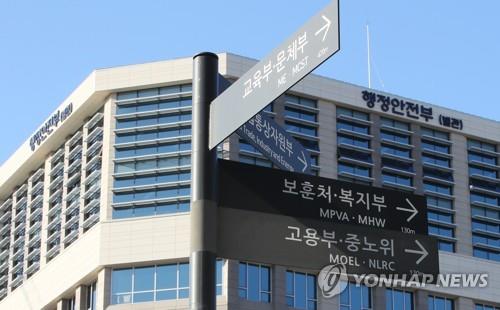 The QR code system will first be used by those who tour the rooftop garden in the Sejong complex.

Visitors will have better accessibility as they won't have to submit their ID cards to receive a visitors' pass and won't be required to be accompanied by authorities if they download the QR code on their mobile phones in advance, the ministry explained.