"It would be an extraordinarily risky venture for Kim Jong-un to get into the proliferation business when it comes to nuclear weapons. It's something that I am hoping won't happen. We don't see it on the WMD side–we don't see that happening at this point," O'Brien said in a recent interview with U.S. online magazine 19FortyFive.

"I think the North Koreans understand that if they started proliferating on a significant scale -- either ballistic missiles or delivery systems or in the worst-case scenario weapons of mass destruction especially on the nuclear side or biological or chemical as well -- that would really be crossing a redline with not just the United States but the international community," he was quoted as saying.

North Korea has maintained a self-imposed moratorium on nuclear and long-range missile tests since November 2017.

However, the country unveiled a new and longer-range intercontinental ballistic missile in an October military parade, indicating its continued development of weapons despite its recent lack of weapons testing.

O'Brien warned it would be "extraordinarily unhelpful" for North Korea to engage in proliferation activities.

"We have real concerns on the ballistic missile proliferation side of the ledger but on the weapons of mass destruction side, it's something that would take the crisis to a whole other level," he said.

The top security adviser also underscored threats posed by the North in the cyber realm.

"North Korea has a very sophisticated cyber capability and cyber warfare capability. That's something we take seriously," said O'Brien, according to the online report published Monday.

Regarding the COVID-19 pandemic, O'Brien said Pyongyang has yet to report a mass outbreak of the new coronavirus.

He noted the U.S. will likely be willing to assist the impoverished North if asked for help.

"On humanitarian assistance during the COVID crisis, we have been helpful to friends and foes alike," insisted O'Brien, adding U.S. President Donald Trump has especially been generous with ventilators.

"I think the president's inclination is to always provide humanitarian assistance around the world to whoever needed it when it was a flood or fire or pandemic relief. That's something the United States does and we do it often without respect to the governing party in a country that is seeking assistance," he said. 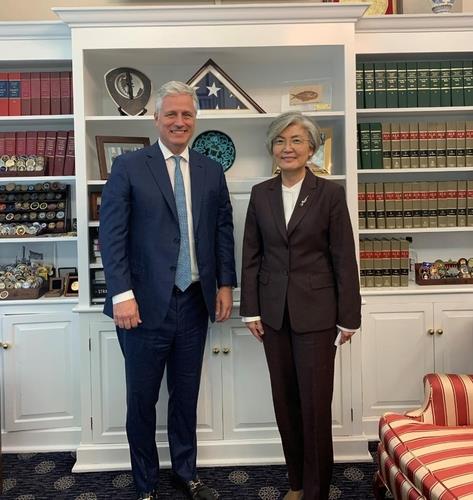